Something old, something new

When you’re in a truck, the only things you see is motorways and industrial estates.
Being on a narrowboat is not that much different. The canals are the motorways of the past, and they used to go through…? Yes, industrial estates. Some of them are still there. Derelict, but impressive. 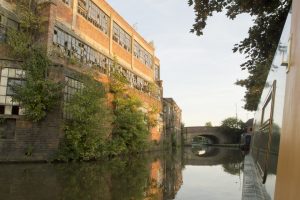 Like the Wilson & Stafford hat factory, the last hat factory in Atherstone, closed in 1999. The building (right next to the canal) was due for demolition in 2008 in order to build flats, but for one reason or another this has not yet been carried out. 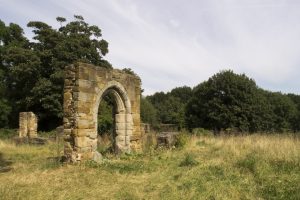 Canals also go past other relics from the past. Alvecote Priory is one of them. Again right next to the canal. Both the hat factory and the Priory have no signs whatsoever. One could easily miss them. Even when moored just opposite from them.

Moored just opposite the Priory

Well, for a while, that is. Because when we go to something new we end up moving WRT. So what happens?  After I visit the Priory we decide to have a drink in a pub called The Samuel Barlow. 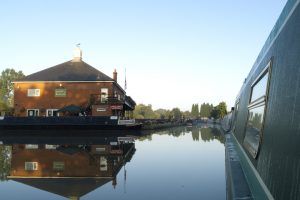 The pub is named after the coal merchant that owned the site, and started a canal trading business with two narrowboats, carrying coal from the Warwickshire coalfields to London and the River Thames. And who are moored opposite the pub? Pat and Stephen! So we move the boat, and the rest is history.

Oh, yes, I forget to mention. We do play golf at Atherstone Golf Course. I lose more balls than there are holes; a very tough but very nice course. 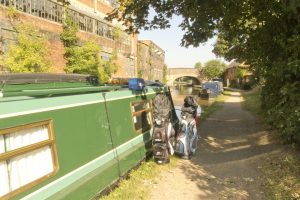 Waiting for the taxi

Of course we hire a buggy, but don’t worry, I get my work out when we leave Atherstone the next day: eleven locks! Although I must admit: they are easy to operate, and the scenery is absolutely wonderful. My reward, after all these locks? A visit to the most amazing antiquarian book store I’ll ever go to: Chester’s Antiquarian Bookshop in Polesworth. After entering the shop it takes me ten minutes to close my mouth and start breathing again. That is the effect their 45,000 books have on me (being limited to less than 100 books…).

I manage to get a copy of Ramling Rose, a book about a boatwoman (the copy is even signed by the author). And five more canal related books.

We spend a night at Hopwas, where we are moored right between two pubs (The Red Lion and The Tame Otter) but prefer a delicious indoor Salmon and Savory Rice. 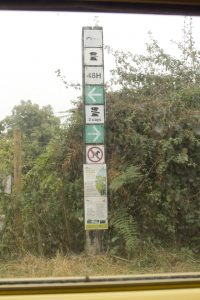 Half of WRT can stay 48 hours, the other half two days. Not knowing how to interpret these signs the right way, we decide to leave after 18.5 hours, pass some well-known canal places like Fazely Junction and Fradley Junction and moor up at Alrewas. Tomorrow we’ll go on a non-canal-related trip.