I just hear everybody think: and she didn’t do anything cultural, while being in Liverpool?
Of course I did!

I went to the Walker Art Gallery to see two things.
An exhibition about 18th century fashion items. With two video’s about how middle class men and women were getting dressed in the morning. 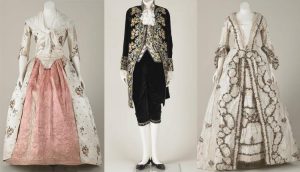 The video’s were the most interesting.
They make very clear that without servants a middle class woman could not get dressed. And it would take about half an hour at least to get presentable. And that’s without doing her hair. It’s the same for the man.
Just imagine living on a narrowboat…

I once made a dress like that. Made of cheap curtain material. For a dance project.
Can you imagine me, dressed like this, on the tiller of WRT? 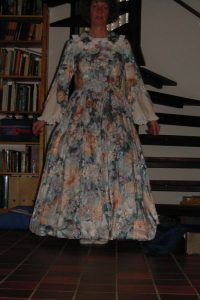 The other cultural thing was going to the Cavern Club. 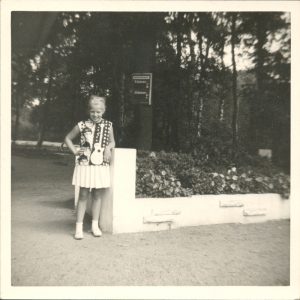 Although dressed like a Beatles fan, I actually never really was. It was just that my neighbour worked in a textile print factory. This fabric was actually never for sale in Holland but went straight to the UK. This top is made of cut-offs that would have been thrown away. 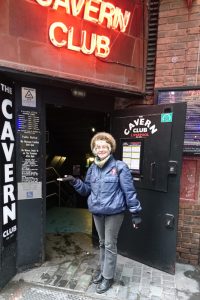 Just a couple of years later

The rest of the flotilla stays at the Cavern Club most of the day. I preferred to go back to the boat and knit.
I would have spent a whole week there if it was about Pink Floyd, or ELO…