On our holiday in 2013 we visited (Chester)… But we cheated, by stopping at Egg Bridge and taking the bus into town. That did save us a lot of locks. This time we make up for that. We go to Chester, and even as far as Ellesmere Port, to visit the Waterways Museum. 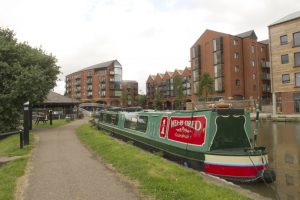 We moor at Tower Wharf, go to Tesco to do shopping, and head for the race course. 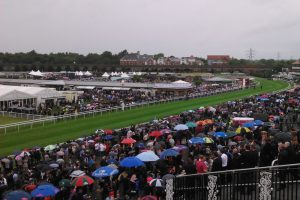 A day at the races. Well, we’re not really dressed for that, so we stay outside the race course. Other people are dressed to the T, on skyscraper heels, and completely covered in spray tan. Their hands never without a drink. Half ways through the races it starts to rain. We’re OK, the others mentioned before are not. Soaked, drunk, dripping spray tan they make their way home… on flipflops! 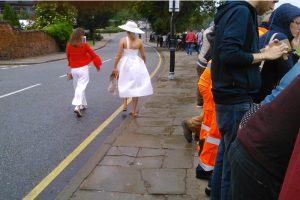 The next day it is bloody windy. I’m on the tiller and I’m doing fine… until Lawrance opens the lock that lets us go into the basin at the museum, to become part of the exhibition for a couple of nights.

As soon as Lawrance opens the lock doors I know I’m in deep trouble. To my right the lock wall extends for a while. I do have to turn left. Which I will never be able to do, due to the gale force wind, and the lock wall to my right. Still not a problem. I can ‘spring’ the boat and reverse to the planned mooring.
But what do I see right in front of me? A funnel, sticking out of the water. 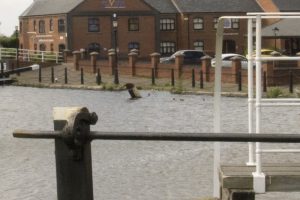 What is usually attached to a funnel that sticks out of the water? A shipwreck. 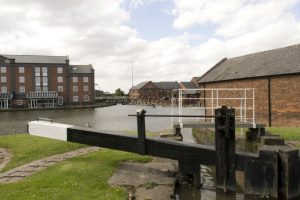 And due to the wind and the wall to my right, WRT’s beautiful nose will hit whatever part of that ship that’s under the water way before I can do any steering…! 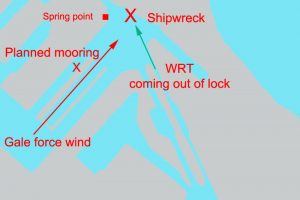 I manage (just) to stay a bit away from the shipwreck. Lawrance grabs the front line. He wants me to try to turn the bow to the left. I don’t want that, because that automatically puts the stern (and thus the propeller) right on top of the shipwreck.

In the end I manage to ‘spring’ WRT’s stern away from the shipwreck, and reverse to the planned mooring. After that WRT is a boat in a museum (not half sunken, like most of the boats). 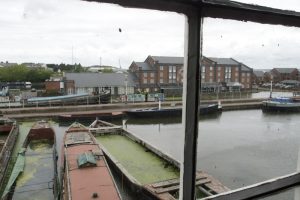 Part of the museum

The museum as such is not worth visiting again. The only things I like are the horse drawn tar boat Gifford, a (nearly empty) boatman’s cabin on an old workboat (to get an idea about the size of the living quarters) and the crocheted replica of the side of the cabin on the Friendship. Especially the chimney is really cute! 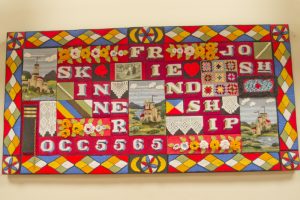 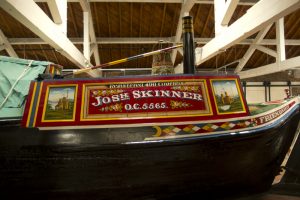 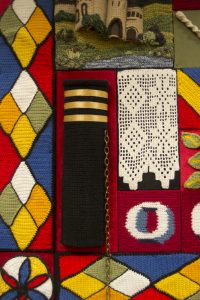 Other than that, the museum feels neglected. It’s nothing compared to the Black Country Living Museum. Unfortunately…

The day we leave the museum, I learn why women are better steerers:

Women use the engine; men use brute force and ignorance.

I can but agree…!

We spend another night in Chester, after avoiding a fallen tree and a diagonally free-floating coal boat. And after doing the Chester shuffle (under the guidance of a volunteer lock keeper). Two boats coming out of the lock, one boat to go into the lock? Yes, one can do this, without taking one of the boats out of the water! 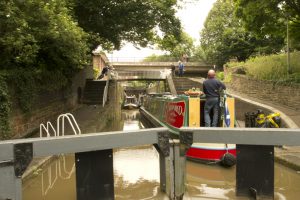 We moor up opposite Abakhan. Just a little bit away from a winding hole. The next morning a hire boat will knock me off the toilet…!
Hire boaters, can’t even properly steer a boat.

We leave WRT in Tattenhall Marina, while we rent a car to go down to Southampton, for a wedding reception in a marina. 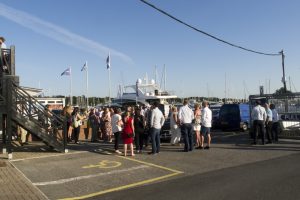 Boats, but not as we know them

A 60 ft boat? Not for less than a million…! Would I change the environment? Never!