So she finally found time to write…
It will be me, then, to fill in the gaps, because (as per usual) she’s gone straight back to her crocheting.

Crochet was also the main subject on the fifth of January. Five women, I counted (well, six, if you include Magda), visited me to have a crochet day. Can you imagine, six women? 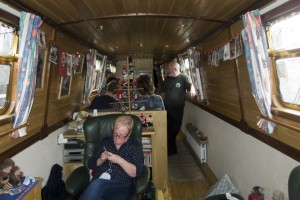 A serious activity for some… 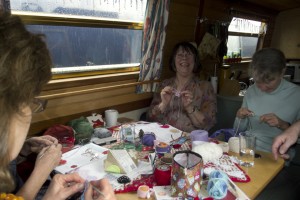 …and fun for others

I felt more like a hen house, and I definitely needed my ear plugs. But apparently is was a great success, and I have to face even more women on the 19th of February (O, dear me).

I should have asked them to crochet a woolly hat for me, because a week later I was surrounded by ice for the first time this year. 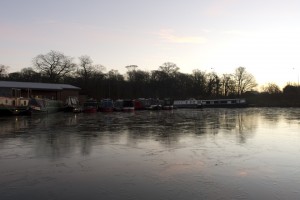 It didn’t last long, though. Since then we must have had an entire alphabet of storms.
I’m just loosing count.

During one of these storms Lawrance and Magda went away for their yearly wassail dinner. She showed me some pictures of the apples, apple blossom and apple bunting she crocheted. 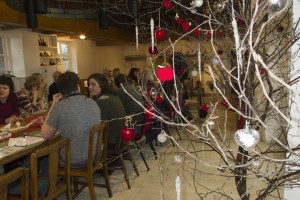 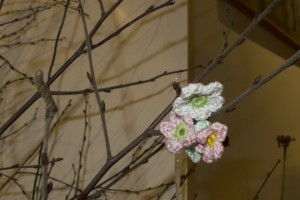 And a picture of her menu choice: pheasant pie. It didn’t look too pretty to me, but Magda assured me: it was absolutely delicious. Not that she had anything to compare it with. It was the first time she ever had pheasant. 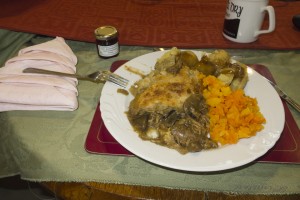 And the latest news?

She started the War of the Roses…!

And now I’ll stop writing as well. No, I’m not starting to crochet. But it is sunny, for the first time in ages, so I’m going to top up both my tan and my batteries!