I know, I just noticed the date of my last post… So this one will cover SIX MONTHS!
Well, I suppose I could divide it in two: our time cruising, and our time not cruising.

Yes, we actually do cruise. We leave on the 1st of August, heading in the direction of Liverpool. But the Leeds&Liverpool is not as we know it. It is reduced to the width of one narrowboat. This picture, taken the next morning, gives you an idea. I had to turn around at this winding hole. Could not figure out where exactly the winding hole was, turned in too late and got stuck in the greenery.
Just try to turn a narrowboat when stuck in thick weeds… 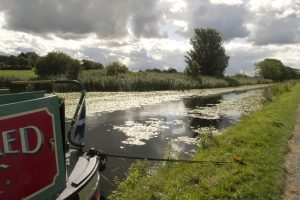 Turned around we’re starting heading south. For corona safety reasons we plan to moor only in the middle of nowhere. Like here, just before Dean Lock. 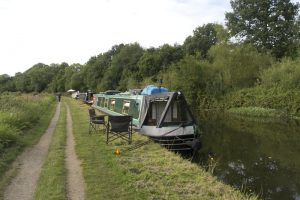 In the middle of nowhere, I said. Well, although it’s only friend Chris of nb Basingstoke that’s on the towpath in this picture, on average it is a lot busier. I reckon on average there is one person per minute walking past the boat, every minute from about 7 am till 8 pm. And that’s with the nearest town about 5 miles away…

It is actually less busy when we stop in Lymm. We planned to, but we also have to.
A truck driver didn’t obey the signs about a hump bridge, and ‘parked’ his low loader, with a huge crane on it, right on the bridge. So bridge closed, and canal closed. 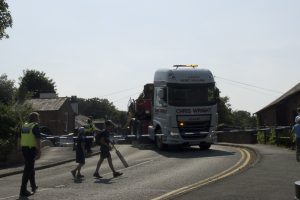 By that time Chris and Ray arrive in Lymm as well, and the six of us go for a meal to The Church Green, a very good restaurant, with Aiden Byrne as chef.

After a while of cruising 2 hours a day, or 1 hour and 45 minutes or even less, we decide we need to set ourself a proper goal. Since me and Lawrance never did the Macclesfield Canal, that is where we in the end are heading for.
And I’m glad we did, I really like the Macc!

Not that we keep on moving…
We just have to spend a couple of nights at the bottom of the Bosley Locks. Because friend Ian is there. So lots of wine get consumed and lots of cards played. 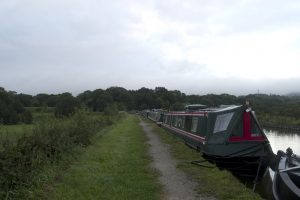 Even the Peak Forrest canal (also new to us) gets a short visit. We spend a few nights in Bugsworth Basin, and have two brilliant meals at Casa di Pizza in Whaley Bridge. 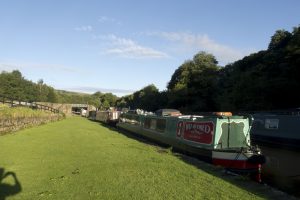 On the way down to the Trent&Mersey we again stop just after Bosley lock 12.
And always being up very early in the morning, I witness one of the most impressive sunrises I’ve ever seen. 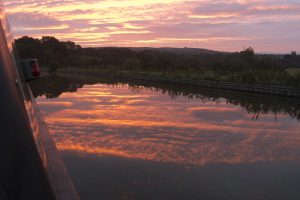 Back on the Trent&Mersey Ann and Mick are heading south towards Great Haywood, and we’re heading north towards the river Weaver.

We use our new washing machine (and part of the towpath) for doing the laundry.
We’ve moored here before, but under very different circumstances, as this picture from the 4th of April 2018 shows…! 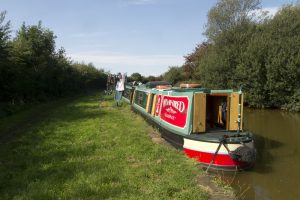 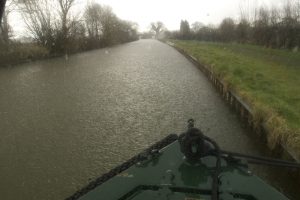 On the river Weaver our first stop is at the new pontoons in Northwich.
Not that there is space to moor, but we just breast up against another boat.
Which happened to Swansong (and of course we knew that…). 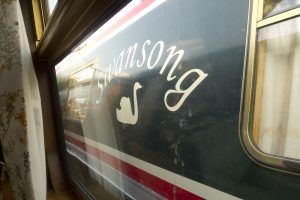 As Ian mentions on his weblog:
“If stories begin to circulate of drunken Northwich boat parties and revellers returning home in the wee small hours then we might guess at where they could have started and how exaggerated they have already become.”

By then Covid-19 starts to worry me a little bit. Cases are going up rapidly, and I have visions of a complete lockdown, and us caught on the river Weaver because Anderton Boat Lift would be closed. And/or stuck just outside Wigan, because all the locks in Wigan are closed (and padlocked).
So I book the lift for as soon as possible. And on the most windy day of our time out cruising I have to try to get 18 ton of steel off the wall at the lift and into the caisson while the hurricane force wind pins me against that wall. 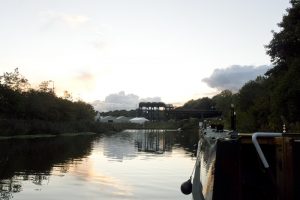 And it is obvious: the rainy season has started. About every other day we have to stay where we are, due to heavy rain. 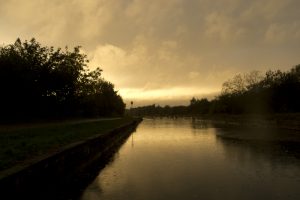 Start of the Rainy Season

Luckily it is dry when we go through Wigan, together with Bernie and William of Spindrift and neighbours in the marina. 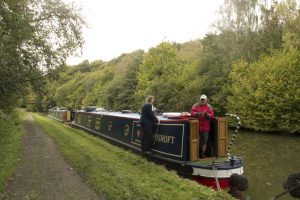 The following day is again a ‘sit-the-rain-out’ day. It just rains, and rains, and rains. Just look at the tree behind Spindrift and the same tree some 40 odd hours later. 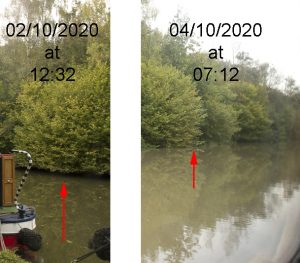 The next day is fine, but the Leeds&Liverpool canal looks a lot wider. And there are lakes on both sides, that were not there before. 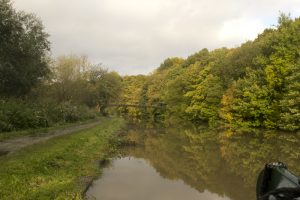 Other than that, it’s not a bad day, and after 64 days out (of which 44 days actually cruising) we’re back in the marina.

Out for 64 days, cruised on 44 days.
Did 260 miles, and this year I did more locks than Lawrance, but Lawrance did more bridges than I did.
I spent 15 minutes more on the tiller than Lawrance, while he covered 0.2 more miles…