Rocked to sleep again and again

An update of all that happened over the last month or so.

First of all I still owe you the results of the oliebollen bake contest.
No, they didn’t really look like oliebollen. Yes, they were round, and had approximately the right colour. But when fried in oil they look like amoebes. My muffin pan oliebollen looked too smooth…
And I didn’t manage find any poedersuiker in Tesco or Aldi. 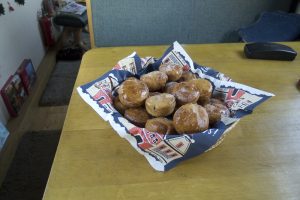 But they tasted absolutely heavenly. As soon as our guests arrived the oliebollen just disappeared…

We spent New Year’s Eve playing cards.
A game called Shithead, but because shit is not a nice word we call it Poo. 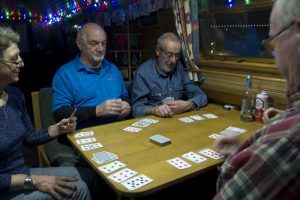 With Chris having her birthday on the 4th of January the girls decided to go out on a girly night to pre-celebrate that. In the end six of us went to nearby Nellie’s.
Walkable, but not on high heels, as I found out… 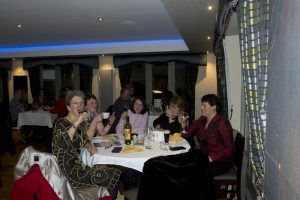 Girl’s Night Out at Nellie’s

And except for saying cheerio to my Norwegian jumper (see Requiem for a jumper) I also had to say goodbye to something that has been with me for at least 45 years.
The General, as it was called by my parents. Because it did look like General de Gaulle to us. 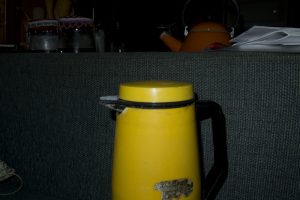 Living on a boat is hard work. But there also is time to relax.
For example by going to an adult panto. Something completely different from a normal panto, but it had us in tears (although I probably only got half the innuendoes…). 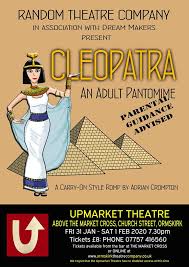 I’ve polished our Warp Drive. Or is it our WIFI? Our new Washing Line setup maybe? 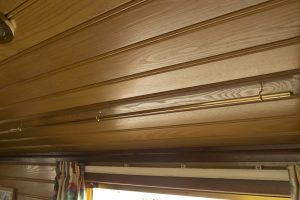 But unfortunately it is. Because I bought a new washing machine. A proper one.
The twin tub I got for my birthday, in 2018, worked OK, but turned out to be a washing machine for right handed people. And squeezing the water out of garments was just too hard for my wrists.
And when Ann told me how to operate a normal washing machine just off the inverter, I decided to get one. 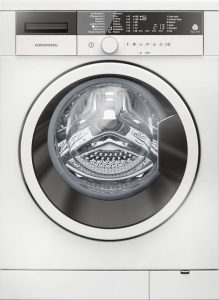 I bought it at Currys/PCWorld and had it delivered and installed.
Well, that was the plan. They delivered the machine, but, although we told them it had to be installed on a boat, they refused to do that, mentioning Health and Safety as the reason. It was too dangerous to get the machine from the engine cover onto the floor, in such a small space…!

Rubbish, of course. They were late already, and this would take more than the 15 minutes they had to install the machine. In the end they f***d off, Lawrance and Mick lowered it to the floor, and Lawrance connected it to the inlet and outlet.

I actually ended up polishing all the brass on the boat.
Had to polish the handles on the side doors twice, because they got completely stained again in just one night. Luckily the mushroom bases stayed OK. I don’t mind polishing these bases, but they are so horrible to screw back in place. They are just at a distance where I can’t focus properly, so putting them back is a real struggle.

Our fire also was a struggle for a while.
Every morning I clean the fire door window, open the vent, put some coal on and let it catch. One morning however, there were still no flames, even after 3 hours.
But CO-levels were up to 46 ppm. And the smell in the boat…!

Because Lawrance had sweeped the chimney just three weeks ago he reckoned it was not the flue. So it must be the coal from this just opened bag. To rule things out I order a bag of coal from the marina. That coal behaves a little bit better (just).

But in the end smoke comes out of the vents and the flue so I decided: it must be the flu.
Anyway, we let the fire go out, and switch the central heating on. Lawrance sweeps the chimney once again and lo and behold out come the culprits: two huge lumps of solidified tar. 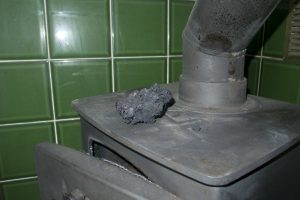 One of two, blocking the flue

After that our fire is as easy going as ever…

Of course, being in the marina, it’s still the same old, same old: yoga, gym, swimming, going out for supper, playing cards. And new recipes for supper.

As former colleague Alan Wilson used to say: “There is a first time for everything” I serve Jerusalem Artichokes for the first time in my life.

Roots that have nothing to do with Jerusalem or with artichokes, but, depending on your country of origin it’s either a wrong spelling of girasole, the Italian word for sunflower, because of its familial relationship to the garden sunflower.
Or, if you’re from Holland, it’s a wrong spelling of the word Terneuzen, a city in Holland where, around 1610, Petrus Hondius, a Dutch botanist, planted a shrivelled Jerusalem artichoke tuber in his garden and was surprised to see the plant proliferate. The first Jerusalem Artichokes to appear in England came from Terneuzen.

Whatever explanation you fancy, the tubers are delicious, and easy to prepare. Try them, if you see them in a shop. 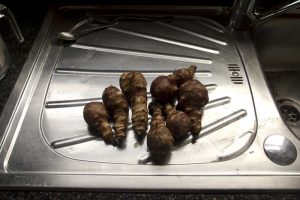 Oh, and before I forget, I cleaned all the windows inside and outside. Because of the problems with the fire a whole layer of dirt had been deposited on the inside. And as soon as the sun would come out, the windows would turn solid grey… So I HAD to clean them. And did the outside as well. Just to find out that we must have had very dirty rain, because the next morning the portside windows of WRT are covered in dirt spots again. 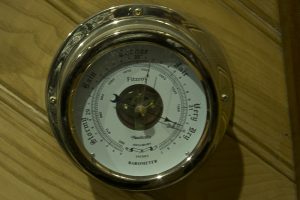 Did we have the highest air pressure I’ve ever seen since I’m on WRT on the 19th of January, (very dry), on the 9th of February storm Ciara hits us. Starteds on Sunday, ended more or less on Friday.

For 6 days walking from bow to stern is difficult (hand rails come to mind), understanding each other is difficult (ear plugs for the constant roaring howling wind around mushrooms and topboxes?) but falling asleep?

Great! Every night I’m rocked to sleep, Knowing for sure that WRT will keep us safe afloat. 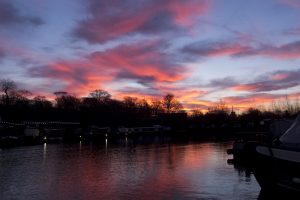 Dennis on his way

At the moment we’re just at the end of storm Dennis. Strong, but short-lived.

Hopefully Dennis did not cause a lot of trouble on the railways, because tomorrow me and Ann are off to London.

This time we travel by train, and are away for four days. To see Cirque du Soleil in the Royal Albert Hall, to visit museums and galleries, and to eat at more famous restaurants.