On the Severn again 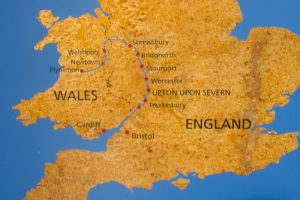 We’re on the river Severn again.
We leave the beautiful blossom-lined canals, to face the uninteresting banks of the longest river of the UK. 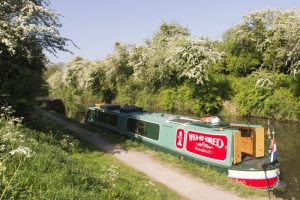 It’s hot, the moorings we plan to stop at are full, and we end up in Upton-upon-Severn. After seven hours of cruising
I had breakfast at 06:15 hrs, and manage to get lunch at 16:15 hrs! And we miss Upton-upon-Severn Folk Festival by a week. Shit!
We decide to stay another day, so we can visit the village, do shopping and laundry.

Upton-upon-Severn has a very nice Tudor Museum. When I try to find the exit to the garden a women tells me where to go: IN DUTCH!
Back from the garden I have to know: is she Dutch?
No, Jo lived in Holland for 17 years, and still speaks perfect Dutch, albeit with a Rotterdam accent. Of course she wants to practice. We talk about Holland, living on a narrowboat, missing the folk festival… Then Richard, Jo’s partner asks: “Do you like morris?”
Needless to say that in the evening I end up dancing (two dances) and playing (one dance) in Ripple, a little village a bit further on the river. 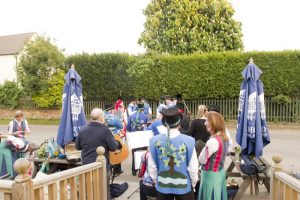 I promise to plan a bit better, next year, and NOT miss the festival.

One of the reasons I don’t like rivers is the danger of flooding. Upton-upon-Severn has now flood gates all over the place. The village needs it, as the following picture shows. 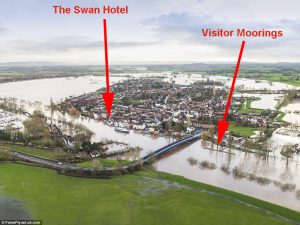 The visitor moorings are on a floating pontoon, so we would have been safe. But we also would have been stuck for a while: no room under the bridge.
And in the Tudor Museum I discover a very frightening item: 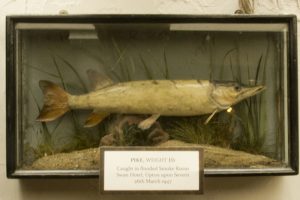 We have a nice meal in the Swan Hotel. I have a Pear and Brie Salad, while Lawrance has Fenders and Mash. I know, usually this dish is called Bangers and Mash, but the Bangers are so huge, one could use them as fenders, hence the change of the name.
Oh, and we immortalize WRT on the ceiling beams of the Swan Hotel. 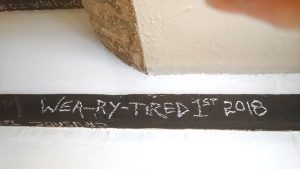 What a brilliant idea to raise money for charity!