We have an early start, this morning, Eddie wants to be back at Acton Bridge around lunchtime. We pass Anderton Boat Lift again, and again no place to moor. 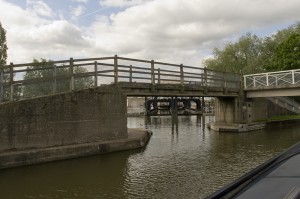 Now Lawrance gets his first tunnels, Barnton Tunnel and Saltersford Tunnel. I will not mention the amount of points he collects here… 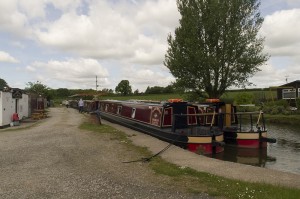 Back at Acton Bridge (part 1)

At Acton Bridge Eddie and Carol pack their stuff into the car, while Danny provides us with water, and does a pump out. He also tells us how to fit the tv aerial. The four of us go to The Leigh Arms for lunch.

Then Eddie and Carol say goodbye, and we are off towards Wigan. It’s only the two of us now, so when I need the toilet (just after we leave Acton Bridge) I ask Lawrance: “Are you OK on your own, while I go to the toilet?” The answer is: “Yes, of course.” So that’s me off to the toilet. As soon as I sit on the toilet I hear the engine being forced into reverse, immediately followed by a big BANG. Did I not hear, not so long ago, someone saying he would be OK on his own…?

About two miles after Acton Bridge we get to Dutton Stop Lock and the Preston Brook Tunnel. The water difference at Dutton Stop Lock is only about two inches, but the lock gates are absolute horrible. I need my whole body weight to move them. Luckily there is a guy who helps me. 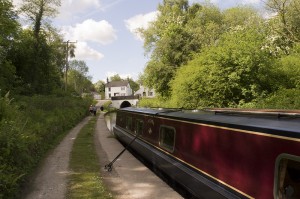 This guy just took his boat to the dry dock, and is on his way back to his home marina. To save him climbing around the tunnel we give him a ride. Lawrance steers the boat, while I try to take pictures in the tunnel. Our passenger comments on the candle that, on our boat, acts as a tunnel light. He reckons it’s a bit dim. So far it was not a problem for me, but Lawrance manages, even in this completely straight tunnel, to hit the walls as well as to damage the top of the boat. More points!

After 22 minutes we’re back in daylight. And on the Bridgewater Canal. This means a canal that (in theory) is a lot wider than the Trent & Mersey Canal. But the sides are sometimes overgrown by (beautiful) rhododendrons, especially in Higher Walton. It is definitely spring now! 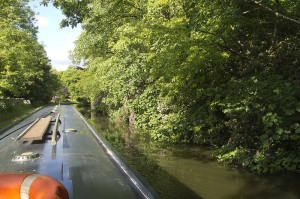 Spring is in the air

We moor at Stockton Heath. People from the house next to the towpath take a look at their neighbours for the night to be, and before I finish fastening the front rope, Lawrance and the man are talking diesel…! Having trucks of his own the man knows a lot of people in the industry. Even Lawrance’s boss. How small is the world.

We decide to have a drink at The London Bridge Inn. We take a seat on one of the sofa’s, and at 6 o’clock we both yawn. What a life!
Unfortunately they don’t do food at this time on a Sunday, so we try to find a fish-and-chips. And end up with a take-away pizza from Domino’s Pizza. After that it’s an early night.