Once again it’s sunny and warm today, and Lawrance is at the tiller. So he has to do the daily pre-cruising checks. He discovers a lot of water in the engine compartment, and when checking the cooling liquid of the engine, he finds out that the header tank is nearly empty. There is obvious something wrong here, but there is nothing we can do at the moment, except for refilling the tank with water. And start cruising

We don’t have a water hose to fill our water tank, so we stop at Altrincham (Broadheath Bridge) to buy one at B&Q, pass through Sale (where we moored last year, next to The King’s Ransom) and turn left at Waters Meeting. Just before Ashburton Road Bridge we stop for a late lunch. 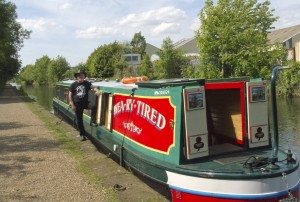 After this lunch we are faced with a problem: the canal ends. There seems to be a gate in the canal. Which in fact is the Barton Swing Aqueduct. Build in 1894, still operating, and now clearly open. I wonder how to explain that in Holland. “The bridge was open”, is a common excuse in Holland when one is late for school. But now we are on a boat, and should cause a bridge to be open, not being faced with an open bridge…! 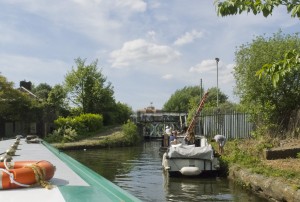 A gate across the canal

Forty-five minutes we have to wait, until the passenger ferry turns up. Closing the aqueduct doesn’t take a lot of time, and soon we’re on the move again. 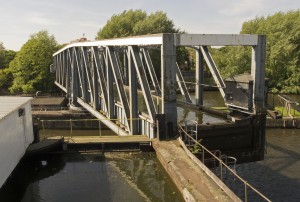 The canal swinging back

Worsley is the next village, with a sharp left turn in the canal, just where the entrance to the coal mine is. It is the birthplace of the canal system, so to speak. Today, with a much better handling boat, Lawrance doesn’t make a fool of himself, but takes the bend effortlessly. 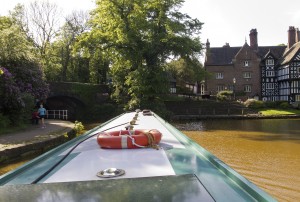 We stop at Bridgewater Marina for the night. The supper at The Moorings is OK, but the boom-boom-boom music till late at night certainly is not.