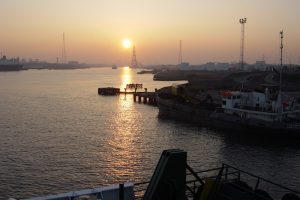 On the same boat (for the first time), just leaving Newcastle

On the 23rd of March 2014 we got confirmation that we were the proud owners of WRT.

On the 23rd of March 2019 we’re on a breakfast cruise to the New Scarisbrick Arms (not that this is very remarkable. It’s only an indication of the state Lawrance will be in on the morning of the 24th. Me and WRT are alright; we went to bed at 23:00 hrs…)

Lawrance is on the tiller on Saturday the 23rd. Nice weather, not too cold, not too windy, no rain.
We first have a present for WRT: 160 litre of red lemonade. Then we leave the marina for Downholland.

Calculating the amount of miles after we’re moored up I realise: Lawrance misses the milestones by 1.1 engine hour and by a quarter of a mile! So it’s up to me.

I’m on the tiller on the 24th. It’s horrible weather. It’s cold, and it is f**g windy. Members of the boatersclub end up straight into the field after casting off.
WRT tells me she doesn’t want to celebrate the 3,000 mile milestone stuck on the non-towpath side of the canal, so she behaves, initially. After the celebration she’s happily going diagonally over the Leeds&Liverpool.

Getting nearer to the marina I’m starting to worry. In this kind of wind there is no way I can turn WRT and go onto our jetty stern first. In fact, I’m not sure if I manage to get into the marina at all. Which would mean the 4,800 engine hour milestone will be out of reach.

But I get into the marina. I just have, for the second time in nearly five years, to moor her head first.