It’s going to be a beautiful day. Although, at 8 o’clock in the morning it is still cold. Outside the boat and inside, because we let the fire go out.

We’re waiting for the things to come. In this case, CRT-people, and more boats.The latter all arrive around half an hour later. One unknown boat, and three more from Scarisbrick Marina! They all spent the night at Bridge 10 (and in the nearby pub), because of fear for vandalism at Hancock’s Swing Bridge. Softies… 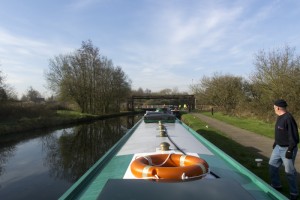 Then three CRT-guys show up, and at 09:15 hrs they open the swing bridge for us.
Off we go, in convoy. Hidden Pearl (the unknown boat) first, then WRT as second. It’s about 45 minutes to the next swing bridge. We make good progress, at 2000 RPM, but the canal is full of debris, and I have to find my way carefully, avoiding garage doors, sofa’s, trees and the usual household waste. In all it feels like plodding through mud. 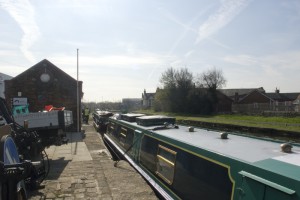 At Litherland we have a quick stop to empty the cassette. When leaving I notice the engine temperature is rising. When I mention it to Lawrance, the oil warning alarm (light and sound) comes on. Problems! We let the others pass, and stop. Lawrance checks the engine, but there seem to be nothing wrong. So we wait another 10 minutes, restart the engine and resume our journey. Just as we set off we hear a clicking sound, and a pedestrian’s barrier emerges next to us. We wonder, did we drag that along, all the way? Causing the engine to overheat? We will never know, but after this the engine is doing fine. 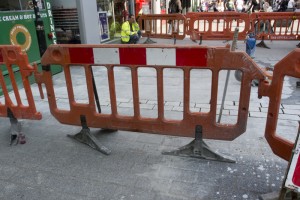 To keep the riff raff away from WRT

When we finally arrive at Stanley Locks the last two of the others just enter the first lock, so we are still on time. We do the first lock, and are waiting for CRT to open the second lock. And waiting, and waiting… The pond we are in gets lower, and lower… 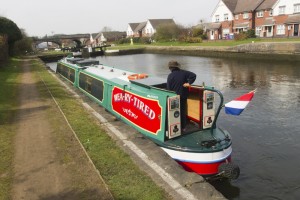 Something is wrong here. As we find out later, one of the CRT guys left the paddles open on one side, so the lock didn’t fill. When finally the lock is full, the pond we are in is nearly empty, and, scraping the bottom of the pond, we just manage to get into the lock.
The other two locks are no problem, and then we are in the docks.

Wow, the water is massive! Collingwood Dock is wide enough to turn a DFDS ferry around. 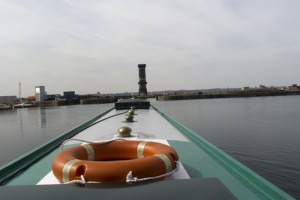 Through Salisbury Dock we’re heading towards Victoria Clock Tower. The clock tells me: it’s 15:30 hrs. I absolutely lost track of time. Just before the tower we turn left. Then I see that at the other side of the tower the clock only has one hand. So I still don’t know what time it is. For a while we go through a kind of canal, the Central Docks Channel, also called Sid’s Ditch. Then it is huge docks again: West Waterloo Dock, Princes Half Tide Dock and Princes Dock. 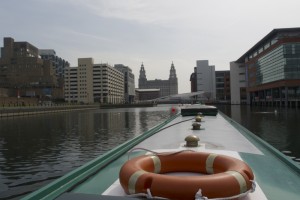 Then a lock, Princes Dock Lock, and after that four tunnels. Are the tunnels on the old canals dark inside, and round like ∩, these new tunnels are made of light coloured concrete, and  box shaped. Tunnel lights are definitely not designed for these kind of tunnels. And they are b****y low! 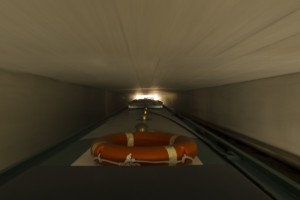 But between the tunnels we pass all the famous buildings of Liverpool: the Royal Liver Building, the Cunard Building and the Port of Liverpool Building. 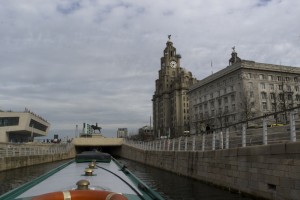 Royal Liver Building (on our way out of Liverpool)

Then another lock, Mann Island Lock, the last one. Now we’re in Canning Dock, another part of the docks, the tourist part. With 500,000 gongoozlers. I need to find my way to Salthouse Dock, via Albert Dock. I know roughly where to go, but there is definitely a lack of road signs (water signs?). And the green (or maybe red) traffic sign at the end of Canning Half Tide Dock is so high up on the dock wall that I don’t see it at all.

But I manage, and with a blast of the horn (to get some swan pedalos out of the way) we enter Salthouse Dock. I want to get into our berth stern first, so the bow (i.e. conservatory) faces towards the dock. But the high buildings surrounding Salthouse Dock produce a strange wind, and I don’t manage. So head first it will be. Which turns out to be the only way for us. The jetties are only half as long as the boat, and with the front door being our only entrance/exit we woud have to swim, to get off the boat. 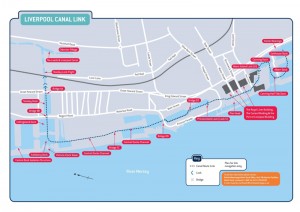 Pfew! I did it! But I’m knackered. My face feels like leather, from the sun and from the wind. I’m absolutely starving, and I haven’t a clue what time it is. Probably time for a real ale and some nachos in the Pump House.

After a walk around Albert Dock we return to WRT. Lawrance makes an excellent prawn curry. I manage to stay awake till 21:15 hrs. Then I’m off to bed. Trying to get to grips with the fact that there is now about 5 metres of water underneath WRT, instead of the normal 1.5 metres. I hope WRT stays afloat…