Lost a lot of blood

Don’t worry, we’re doing OK. But it is definitely time for another update.
Unfortunately not a lot about cruising yet. One weekend we had to go to a demob party at the Commando Training Centre of the Royal Marines in Exmouth. The engine of WRT had it’s annual check-up. I certainly needed a hair cut. I did a lot of work for one of my clients. Got my Dutch tax papers (43 pages of questions to fill in), had an appointment with an UK tax advisor and registered as a sole trader. Got a letter from the Dutch government regarding my voluntairy state pension (12 pages to fill in).

We also transferred the bedroom into… well, how to explain this? All the pictures that used to be in my downstairs toilet in Doorwerth, are now in the bedroom of WRT.
It doesn’t make the bedroom the toilet, but it is still confusing, every time I get up in the morning, or walk to the engine room. 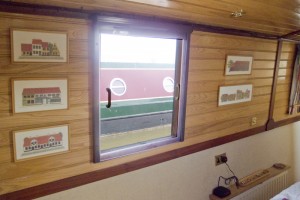 And the bedroom is also a temporary greenhouse. It’s spring, so I started my herb garden. I can’t put the pots (in this case buckets) outside yet, or in the well deck.
They have to stay indoors for about two weeks. At a temperature between 18 and 20ºC. Hence the bedroom. Not that I expect a lot of it. All seeds are of Dutch origin, do I need to say more? 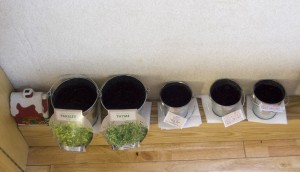 And, of course, someone switched off the big light in the sky. We had just the right amount of clouds to be able to see the (part) solar eclipse. 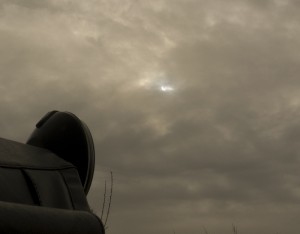 Not that it was really spectaculair. I’ve seen one in the USA, in 1984. The sun was then covered by the moon for 92%. Birds stopped singing, and cows went to sleep. And living in the woods, at noon the surroundings turned into something eery.

Since there are no trees on the jetties, we didn’t have any half-moons all over the place. The birds only stopped singing for a minute or so, and I didn’t see any cows go to sleep.
Besides all this, just after I took the picture of WRT and the sun, the clouds thickened, and that was it.

“But what about the bloodshed?“, I hear you asking now. Well, NHS Blood and Transplant finally managed to drain me of 500 ml good quality Dutch blood. I tried to donate blood in the UK before, but could only make an appointment in Burscough for the afternoon. Since my blood hardly flows at that time of the day, I ended up with all the blood still in my body, and my left arm having as many holes as a Swiss cheese. So next time I made an appointment in Southport, for as early in the morning as possible. And voilá, within the appropriate timespan I produced the right amount of blood. NHS happy, and me happy. It restored my faith in the world. OK, partly…