Is it cold on a boat in winter?

Usually my answer to this question is: “No”. But I might have to change this. Because last night I went to bed with a hot water bottle; the second time since I moved onto WRT. Weird, because there was no ice in the marina. Not when I went to bed, and not when I got up.
But you just know when it will be cold later on. It’s when your feet start feeling cold, even with the temperature in the boat still being 20°C. You put an extra pair of socks on, and when the inside temperature drops below 17°C before you go to bed, you know: pyjama’s and hot water bottle.

I think this is the most wintery winter so far. We’ve been frozen in, a couple of times.
We’ve had sleet on the 21st of January. 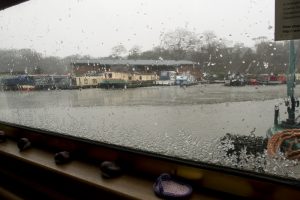 Then we had real snow on the 6th of February. 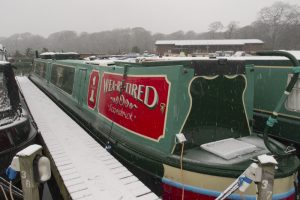 And two days ago, on the 21st, you only needed a jumper, when you went out in the dark; no fleece, no woolly hat.

But when I got up this morning it was only 12°C in the boat. Which is flipping cold.
I know, I could (and/or should) have switched the central heating on. But with Lawrance away to Scotland at the moment, I switched off shore power (and the pump of the central heating runs on 240V).

I don’t really need 240V. I don’t watch TV, and I hardly use my telephone or e-reader. So I charge them on the 12V system as and when the sun puts in more energy than the batteries can take. I don’t use hot water, except for the dishes, and a kettle on the fire takes care of that, as well as supplying water for coffee. Meals are cooked on the fire as well, as much as possible; stews just happily boil away all by themselves.

It sounds as, when I left Holland, I also left modern civilization.
Just think of this. Although my ‘house’ could be classed as a bungalow (it’s detached, and single-story) it lacks all the mod-cons of modern houses. It has no electricity, except for four batteries that are charged either by the engine, solar panels or a landline. Gas is supplied by means of bottles, water has to be filled up from a tap. It’s not connected to the sewage system, rubbish is not collected from the front door. Hot water comes from the engine (or is heated electrical by a so called immersion heater, which takes precious electricity cards; it’s too energy consuming to run off the batteries). Yes, as I mentioned before, the dwelling has central heating, but that takes gas to burn, and electricity to run the pump (and both gas and electricity are not unlimited). So it’s a coal fire that supplies the heath. And no, coal is not unlimited either. It comes in bags of between 20 and 25 kg; and, like the gas bottles, they are heavy. Not to mention the coal dust, everywhere…
To add to the fun, one runs out of the non-unlimited stuff at the most inconvenient moment. Gas: when there are two loafs of bread in the oven. Electricity: as late at night as possible. Water: in a gale force wind. Coal: during torrential rain.

And this is one half of the story.
The other half: all the things that I made myself, lately. I’ve mentioned bread in one of my posts, and sauerkraut, stem ginger and yoghurt. (By the way, the red cabbage sauerkraut was absolutely delicious…)
New to the list of home-made things are bean sprouts and pasta. And a quilt, for extra warmth at night, is also in the make.
A lot of things I wouldn’t have to make in-house in Holland, because they’re easy to buy in the local shop.

So is this a post full of complaints?
Well, actually it is not. It’s basically great fun to minimize one’s consumption or make your own stuff. And it saves a lot of money. (Well, a lot…? And do we need to save money…?)
It only takes some planning skills to limit the use of the non-unlimited things. Or to prepare food stuff that one easily could buy in the supermarket. (Only the bread and the sauerkraut I HAVE to make, whether I want it or not.)

But water to rinse the bean sprouts will soak the breakfast oats pan as well. Milk mugs can be used for coffee (without rinsing). Plates can be used twice. Coal scuttles can be filled at daytime, so no use of the well deck light. E-readers charged around noon, on a sunny day.

OK, at the moment, I do have shore power, because I need to charge the laptop. But that will only cost pennies. And by the time you read this, WRT will certainly be back on 12V. Preparations for supper will be stewing on top of the fire, and I will make use of the (free) daylight to make some more homemade custard cream cookies (no, they don’t taste very well, but they keep forever…). 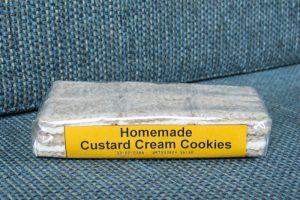 Made of fiber and love