Today would (or should) have been my wedding anniversary.
Today thirty five years ago I had to marry. 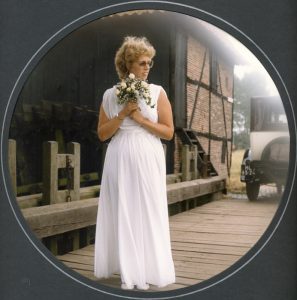 No, it’s not what you think right now. I wasn’t pregnant, no way. Kids were not part of my career planning. Although I must admit, looking at this picture…?!

It was my legal entry to the US.
As just ‘a girlfriend’ I would have had to leave after three months. As ‘an engineer’s wife’ I could stay in the US as long as my husband had to work there.

Thirty five years ago…
My thoughts are going back to that day. The vintage car, the ceremony, the guests, the ‘party’ later on.
And I think of the future I then thought I had.

Then my mind wanders off.
Just imagine there would have been an extra guest. One that was not invited. The Future Fairy. 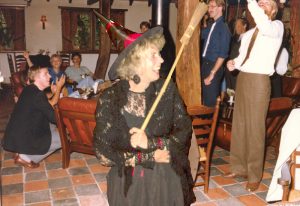 What would my reaction have been when suddenly she would have told me:
“Dear Magda. In thirty five years you will live on a boat in the UK. Together with an ex-lorry driver. Being more or less retired.”

I probably would have told her: “You’re nuts!”
Especially if she would have added: “But you will still have your wedding dress. Dyed green, though!