I hear* the sound of…

No, not of braking glass. And in fact I hear two sounds that I’ve never heard before, since I moved onto the boat last June. Both sounds seem to originate outside the boat.

One sound (the one that wakes me up at 5:22 hrs) doesn’t bother me immediately. It sounds like the zip of a cratch cover, so that must be Brian, our part-time neighbour. Although I didn’t see him coming in, last night, and 5:30 hrs is kind of early for him. On top of that, I suddenly remember that narrowboats are pretty soundproof, so even if it was Brian, I wouldn’t hear the zip of his cratch cover.

The other sound I hear sounds like a shooting sound in a computer game: pee-ewe. Like something under tension that is either released, or touched.
It puzzles me for a while, until I realize: we’re frozen in! 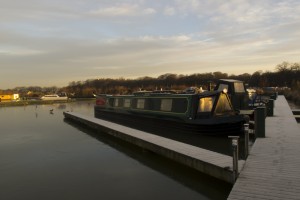 Immediately I get a vision of one of those (wooden) ships that sailed to the Arctic or the Antarctic, and got stuck in the ice. Ice that shifts, and builds up, and in the end crushes the boats into pieces.
That vision is so horrifying, that I go back to sleep for a while.

When finally I decide to get up it is 7:11 hrs. I hear yet another unknown sound when walking out of the bedroom. It’s me, rocking the boat and breaking the ice.
The customary first look out of the galley window confirms it. Except for a small part between the jetties in the middle of the marina (which is full of ducks), it’s ice all over.

After walking to the stove (to open the bottom vent) and back, no more strange sounds are heard. Except for a snoring sound out of the bedroom…
WRT must be free of ice now.

But saying that, there is certainly another, strange phenomena. Something is hitting WRT from underneath. Something bangs against the bottom plate, and also threws the boat against the jetty. It’s not the wind. Lawrance thinks it’s Nessy, but he’s non compos mentus yet, at this time of the day. 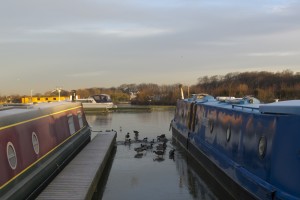 Later we’re in for a nice show. Ducks, running over the ice to get some of the bread my other neighbour is feeding them. First legs go all over the place, and when they finally land on their belly, they seem to realize that today walking has to be approached with a little bit more care. So the next few steps are going fine. But then greed get’s into their minds again and woosh, they are back on their belly.

No guys, that’s not the way to do it. Just wait and see. A couple of days more with a nice frost, and I will show you how to move fast on ice.

On my ice skates… 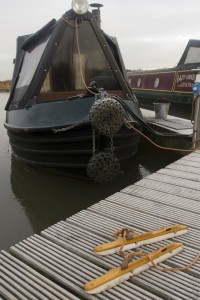 *I know, it shoud have been: I love the sound of… breaking glass (Nick Lowe, 1978), but one is allowed some artistic licence, once in a while.

Last night we had rain, so most of the ice is gone. But not all. And early in the morning I’m able to watch a seagull, being utterly confused. I can actually hear and see him think: Am I missing something here?

He lands on the last section of ice in the marina, while everybody else is in the water. It takes him quite a while before he realizes what’s is wrong and what to do about it. 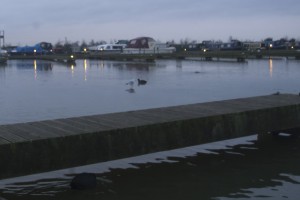