House for the next two weeks

After doing some necessary shopping we’re off to Acton Bridge. We, that’s me and Lawrance, and Eddie and Carol, Lawrance’s older brother and his wife. They have been on a narrowboat before, albeit years ago.

Twice we miss Black Prince’s yard, but the third time gets us there. Our boat, Sienna, is not ready yet (we are a bit early) so we walk to the (second) nearest pub, the Leigh Arms, to have an excellent lunch.
Properly fed and watered we then are allowed in, or should I say on our ‘house for the next two weeks’. We put all our stuff in the saloon for now, and start getting our instructions.

Everything explained, Danny from Black Prince locks his office and accompanies us for the first half a mile. Lawrance takes the tiller first. Within a few hundred yards he manages to hit the side of the canal. He then thinks he has done enough driving for the day, and tells me to take over.

Danny is still with us, and he gives me some additional advise. Then he wants me to steer to the side of the canal, he jumps off, and we are on our own. 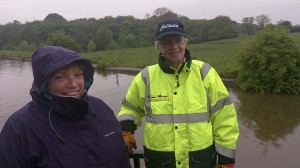 At first everything is going OK. It’s raining, and a bit cold, but I’m doing fine. Until… I get oncoming traffic + moored boats at starboard side + a very small part of the Trent & Mersey Canal. I need to steer… and slow down… and…
I hit a moored boat…! The family inside gets the shock of their life, but they survive. My pride doesn’t. I’m awarded 25 points for the hit.

After this initial misbehave I’m doing well. And we soon arrive at our first tunnel, the Saltersford Tunnel. We find out that it is a timed tunnel, so we have to wait about 45 minutes. There is another boat waiting, and me and the other skipper have a yap. He tells me not to worry but just follow him, with a boats length distance between us.

The Saltersford Tunnel is only 424 yards, but it is eerie. Especially when you wear glasses (like I do) and these glasses are full of raindrops. And you’re in a tunnel that is certainly not straight. And even with the tunnel light AND all the inside lights switched on it’s still f**g dark. But, other than some people we know, I DO NOT hit the walls in the tunnel. In fact, I’m doing very well.

And after this first tunnel (with the usual sharp bend at the end) comes the next tunnel, Barnton Tunnel. This one is even longer (572 yards) and as crooked as the Saltersford one. But again I don’t hit walls, and we’re still in one piece when we emerge at the other side.

It brings us to Anderton Boat Lift. We would like to visit this, but there is no space to moor. So on we go, or better, I go.
We’re passing a lot of industry (and former industry) here. Mainly salt works. And a bit further down there are football stadiums on both side.

When we get to the visitor moorings at Wincham Wharf we call it a day. We’ve done seven miles, and most of the time it has been raining. Now it is time to find the nearest pub.
We do find a pub, but they don’t do food (it’s too late) so, after walking for a couple of miles, we end up in a (posh?) Indian restaurant, where we have a good meal. Which is then immediately used as energy for the same miles back to the boat.
It’s cold, and we still have the central heating on. One part of this central heating system is somewhere near our bedroom. And because it is so noisy, I will not get a lot of sleep tonight.