Sometime last year, probably when we were on the Mon&Brec, the word pantomime was mentioned. I must have said that I had never seen a real pantomime.
Wrong, of course, because here I am, in the restored and redeveloped Perth Theatre, to watch it’s first production: Aladdin. And I’m in for a great surprise… 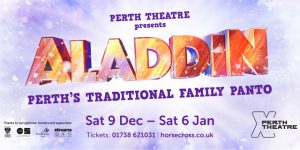 To us, educated folk on the continent, pantomime (Greek: παντόμιμος), or mime, is a kind of theatre without words. Marcel Marceau is the first who comes to mind. So the idea of going to a theatre to see something that lasts about two hours, with not one word spoken, and is very popular with families with children, absolutely intrigues me. No problem, as per usual mentioning something to Ann is a dangerous thing. And we have to leave Scarisbrick very, very early so I can see my first pantomime.

I must admit, over the last couple of weeks I kind of found out that it might be somewhat different from a silent Marcel Marceau. Especially when Lawrance starts shouting: “He’s behind you…!” But it never occurred to me to google the word pantomime.

So when the Widow Twankey steps out of a giant washing machine I know: this is something complete different. It’s the English version of pantomime, a story, distantly related to a well-know fairy tale, turned into a musical, with men playing women’s rolls and vice versa. Local features or events are also part of the script. 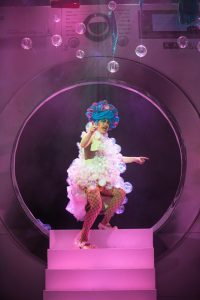 It’s a good thing that I understand the Scottish twang, otherwise 75% of the text would have gone missing for me. And even so, sometimes the adults in the audience start laughing, and I think: “Do I miss something here?” I will never find out if they laugh about something local, something Scottish or just something English. 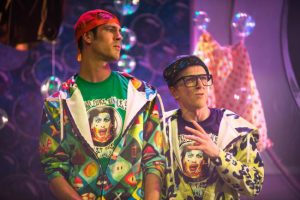 So I see a feisty Princess Jasmine and Wishy Washy who, between them, rescue Aladdin from an unhappy ending, with the help of the Genie and fighting against Abenazer. Another stage in my Anglicizing completed.

* He’s behind you: Audience participation is part of the show. So when the villain appears on stage and the hero doesn’t notice him, the audience shouts: “He’s behind you!”. The audience is always encouraged to hiss the villain and “awwwww” the poor victims.
*Pictures of the Sunday Herald website

One thought on “He’s behind you!*”