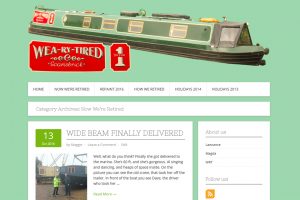 I know, all of you wonder why it took me so long to write a new post. To be honest, I was wondering as well.

One would think: a day in the marina is the same as a non-cruising day during cruising time.
But no, that is certainly NOT the case.

Some figures.
We were out cruising for 159 days. On 85 days we actually moved from A to B. So we had 74 non-cruising days. Lawrance was away during 19 days, that leaves 55 days. We (or I) spent at least 7 days in a museum. And we played golf twice. So 46 days we spent doing this, that and the other.

OK, we don’t venture into unknown territory, so there is less to write about. But I have a feeling that this is not the reason for not writing. It’s something else, and I think I know what it is.

A day in the marina is the same as a day not cruising. We’re moored up, and have all the time in the world to ourselves.
And this is where the thinking goes wrong.

You make friends, while cruising. But you see them for a day or two, and that’s it. These friends don’t knock on your boat with a jar of bread starter, more or less forcing you to start making your own bread again. Which then leads to making one’s own yoghurt. And when they drop some cookbooks, saying: “Have a look at these”, you end up trying out all kinds of new recipes (after an extra trip to Tesco to buy some exotic ingredients).
These friends also don’t write books (well, maybe they do, but you wouldn’t know). Books that are so good that they deserve to be published. And of course it’s me who’s doing the editing of the books, and turn them into an e-book. Which takes some time, when it’s a 200-plus page book…
Emptying the cassette means just that, not a short walk and chatting to (at least) ten people you meet.
Nobody wants you to go to the gym together, walking between the locks and doing the locks is the free, outdoor gym while cruising.

I really think it’s all the people here, that make my day last only a couple of hours. There is hardly any time between getting up, breakfast, lunch, supper and going to bed. Should we give up spending winter in a marina and become continuous cruisers*?

*Continuous cruisers: a boat without a home mooring, that must be on a continuous journey, mostly in one direction, from one place to another. It must travel at least 15-20 miles a year to be able to get this kind of license.