After about half a mile on the fast amount of water that is the river Trent we enter the Trent&Mersey Canal. 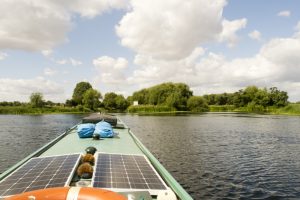 End of the Trent

The Trent&Mersey goes all the way to Preston Brook. Heaps of days of cruising… but only 93 miles. Kind of around the corner? 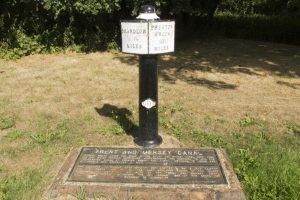 We pass a famous place on the Cut: Shardlow, with its Clock Warehouse. 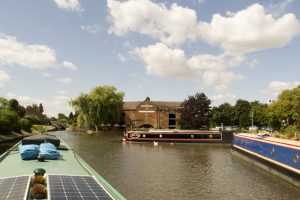 Fradley Junction, two days later.
The most famous junction on the Cut. It’s busy, and the only place to moor is the most gloomy spot. And I have to reverse from the other side of the canal, because by mooring there we would occupy half the lock landing.

While reversing I spot a guy I’m sure I’ve seen before: Barry. Instead of keep on walking and catching my middle rope he turns around and lets me struggle (nae, not really…)
After hugs and kisses he tells us he’s moored three locks further on, and he will tell us as and when there is space there.

Nine o’clock the next morning he knocks on the boat: a space. So I ‘knock’ Lawrance out of bed, saying: “Have a cup of tea, and do three locks for me, please.”

The space Barry was talking about, by then, is long gone, but there is a guy on a moored boat which seems to be ready to leave. So I wait a bit, and we moor at the most sunny spot in Fradley (and the one with the most wasps!)

Next morning, while having a cigarette in the well deck, a dog nearly jumps on WRT.
The guy that’s walking it says: “Come on, Ghost, that’s not our boat!”
I wonder. How many dogs are called Ghost. How many of them will be living on a boat?
So when the guy comes back I ask him: “Are you by any chance called Brian?”

He is. We met him two years ago in Lowsonford, on the Stratford Canal.
In our conversation about where we’ve been so far, and the sometimes heavy locks, the word windlass gets mentioned. He tells me he has one of those new ratchet windlasses. He shows it, I try it and decide: I want one of them.
But I will need a different holster for it. So I email Dave, who made my current holster. He says he will order such a windlass and design something.

Fast forward to 14 August 2018.
We moor up in Coven, after just passing Dave. The next morning I take a walk to his boat.
An hour later I am the proud owner of a ratchet windlass and an addition to my holster.

Nothing happens without a reason…

Lock paddles will be a lot easier from now on. Only have to find a way to deal with heavy lock gates!