Today Lawrance starts as skipper. Eddie is the second officer, and Carol and me are the cabin crew, as well as todays lockies (or should I say wind lassies?). 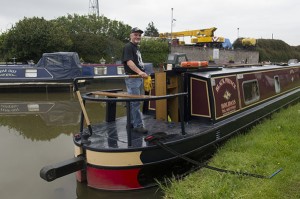 Skipper for the day

Although it’s dry when we start in the morning, we will get more and more rain, as the day progresses.

First we’re amidst industry (Roberts’ Red Rose bakery) and distribution depots (Morrisons). Then we’re in the country. Once in a while the canal gets very wide, when we pass the so called flashes. We pass our first aqueduct, Croxton Aqueduct. After six miles of cruising we arrive at our first lock, Middlewich Big Lock. Time for Carol to teach me how to do locks.

Opening and closing lock gates, and winding paddles, is certainly hard work, though. One often has to climb a lot of steps to get to the lock, and turning the paddles is heavier than winding the legs of a trailer. Me and Carol assume we will look like Arnold Schwarzenegger before the holiday is over.

Almost immediately after the Big Lock is a series of three locks, Middlewich Locks. They are dog-legged, very deep, and slow to use. And Lawrance does a very good job to get into the third lock, having to pass another boat that’s on it’s way north.

Then we get a sharp turn right, into the Middlewich Branch of the Shropshire Union Canal, towards Nantwich and Chester. With a lock immediately after the turning. Hard work again, but after the Stanthorne Lock (just after bridge 27) me and Carol are off duty as lockies. 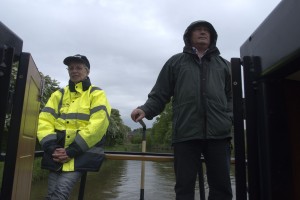 The rain gets heavier, and I keep Eddie company for a while. He takes over from Lawrance, who is soaked to the skin.

We stop for the day at the visitor moorings at Church Minshull. Other boaters tell us that there is a nice pub called The Badger Inn, just next to the church. It’s a short (about 700 metres) but a bit of a dangerous walk (small road, a lot of fast driving cars), so we decide straight away to take a taxi home, tonight.

It’s jazz night in the Badger, with live music. We have a couple of drinks and an excellent meal. The taxi takes us safe back to the bridge where we’re moored. After a night cap it’s off to bed. This time we do switch off the heating system, and I sleep like a log.