Over 2½ years we’ve been in contact, mostly via social media. We’ve kept each other informed about our adventures. But we never met…

But finally we do. On the 7th of September 2016, in Wigan. Around midday Swansong moors herself just in front of me. 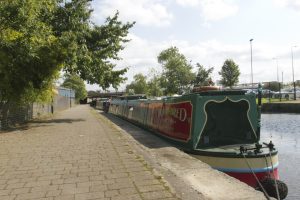 Me and Swansong in Wigan

After kisses and hugs we immediately start yapping, while Ian, Magda and Lawrance go into town for messages and a cup of coffee on a street-side terraces. I listen to all her travels, being a bit jealous, I must admit.
When both crews are away for a meal at Franco’s I tell her that Magda doesn’t want to go on a river without an anchor, that I won’t be able to go through Standegde Tunnel because I’m too tall to get there, that I’m forced to sit in a marina for six months because they think they need a car and a home address.
She then tells me that she sometimes could do without a skipper who thinks he needs to do something scary ever so often. Because he’s not the one who has to try to stay afloat on tidal rivers, or needs to squeeze between these big ocean going ships that create waves even higher than she is.
We just continue gossiping about our crews; they are away till late anyway. And tell us later that, after a delicious meal at Franco’s, they went to Wigan Central, which they think is a train station, but in fact is just a pub. See what Swansong and me have to deal with?

And we’ve got an idea what awaits us tomorrow: The Wigan Flight. But I manage to calm down Swansong. The plans are to get us breasted up and then one of the three will be the steerer. I ask Swansong to think logically: Who will be doing the locks?  So who will be on the tiller? Exactly, we’ll be very safe in the gentle hands of Magda. 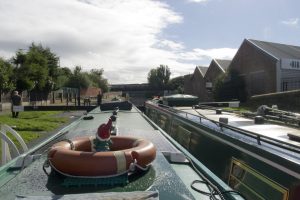 Last lock before the flight

After the first couple of locks, I realize: this won’t be an easy day. The third pond is nearly empty. To have a chance to make it, we’re separated again. I’m out first, but won’t get any further than my stern deck: I get stuck on the cill. Ian, who thinks he can do better, slowly but surely… parks Swansong on the cill as well. When he finally manages to get Swansong over the cill, she gets stuck in the middle of the pond.
We just have to wait until there is enough water in the pond. 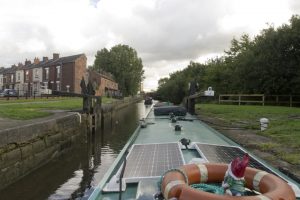 Because the next pond is more ore less the same, the crew first check the weed hatch, and then have their lunch: in the lock. 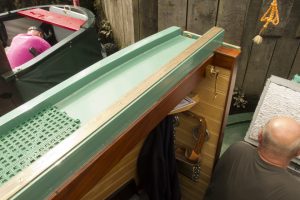 Then lunch. Hope they did wash their hands first… 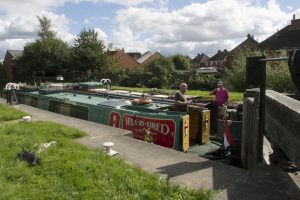 Then we’re breasted up again, and negotiate the rest of the flight. With enough water, and Magda as skipper, it’s a very pleasant experience. 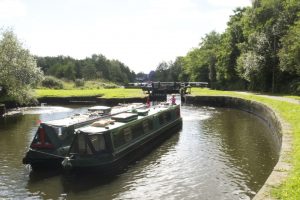 OK, I stick my nose where I probably should not, and saying that we carry a lot of rubbish between us, is not me speaking rubbish. 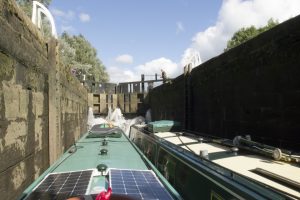 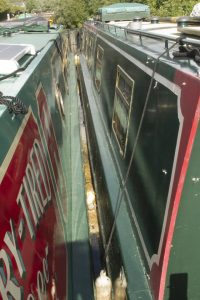 After six hours, 5½ hours of cruising, we get separated again.
We moor up at Wigan Top Lock. 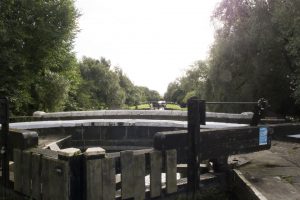 It takes us a while to get Magda off. No, not off the tiller, off her high horse. Did she really think she had any influence with that tiller?
No, as per usual it was me and Swansong who did all the work. But they will never understand…