I know, I can clearly see all the question marks that are popping up. Don’t worry, I will explain. And yes, I had a wee nip, but I just did the dishes, and nothing got broken.

So what is the above sentence? It’s the beginning of Address To a Haggis, a poem written by the Scottish poem Robert Burn. He wrote this poem to celebrate his appreciation of the haggis* . It’s  a bit like Joost van den Vondel* writing a poem about rookworst*. 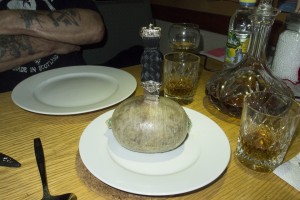 And why all this? Because it’s Burns Night, a night to celebrate the life and works of the national Bard. National bard of Scotland, of course. So for me it was my first Burns Supper (and, don’t laugh, for Lawrance as well). We had Haggis, Neeps (Scottish for swede or rutabaga (koolraap) and Tatties (Scottish for potatoes). Well, what else could we eat? 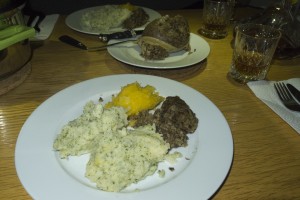 Unfortunately we didn’t have a Piper to pipe in the guests (one: because we didn’t have guests, and two: because I could not find the CD with Scottish Pipe music), so the Haggis didn’t get piped either (STOP your dirty minds NOW, you Dutch people!).
But afterwards I expressed our longing for Scotland by playing Flower of Scotland on the Anglo-concertina. Wearing socks, knitted by Ann, a Scottish lady living on a boat just a couple of jetties from us. 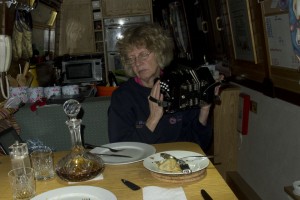 Haggis –  a savoury pudding containing sheep’s pluck (heart, liver and lungs); minced with onion, oatmeal, suet, spices, and salt, mixed with stock, traditionally encased in the animal’s stomach
Joost van den Vondel (1587 – 1679) – the most prominent Dutch poet, writer and playwright of the 17th century
Rookworst – the Dutch version of Mattessons smoked sausage
Anglo-concertina – No, it’s not MY Anglo-concertina. It’s Ian’s, our neighbour. He bought it, thinking: It only has 20 buttons, must be easy to learn…