Open a cupboard: wrong cupboard.
Open the cratch cover: wrong side.
Leaving for our annual summer cruise: wrong weather.
(Next to me in bed: wrong man?)

Everything got wrong, since I have a pasta machine, and WRT has a new front fender.

Before I moved on the boat, I got rid of 95%, maybe even 99% of my belongings. But in the mean time I got a lot of new things. Especially kitchen equipment: a fermentation crock, a cabbage shredder, a pasta machine. So it was time to reorganise the boat.

All cupboards in galley and bathroom got emptied, stuff out of date got thrown away, and things, not used since we’re on the boat, went the same way. Then everything went back into the cupboards.
But 99% of the stuff ended up in a different cupboard. Did I fill the cupboards four years ago in a logical way, logic is totally gone now. Excess kitchen equipment, for example, is now in the bathroom. And because Lawrance put everything back, it’s more a right-handed kitchen now as well.

The pasta machine, though, is a good addition to the kitchen equipment. Making home-made pasta now is a piece of cake and it tastes fine. One should (in theory) have a pasta drying rack, like this. 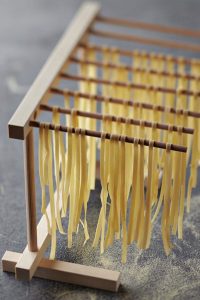 But WRT is a posh boat; she comes with five pasta drying racks built-in already… 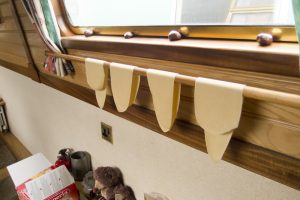 I must admit, we’ve now got a lot of extra space (more kitchen equipment?), but doing supper involves a lot of non-repeatable language, at the moment.

Stepping off the boat, straight into the marina was due to WRT being turned around. She got a beautiful new (extra) front fender. Now I can safely put her nose against lock doors, without Lawrance screaming: “Go back, you damage the front fender…!”
It was easier for Robbie to sit on the pontoon, to attach the new fender, than to sit on the water, hence the turn around. 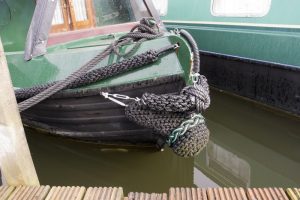 Because we’re leaving soon anyway, we thought to leave WRT turned around till then. But it didn’t feel right. The exit was on the wrong side, the light inside didn’t feel familiar, the side doors (main entrance for heavy, full shopping bags) on the wrong side. So after one night we turned her around again.

The plans are (were) to leave Saturday the 17th of March. We always say: we’re in the marina in the winter, which implicates to me that we are cruising during the summer. But it’s far from summer. And I don’t have to worry about not having pictures with snow for my yearly calendar for the next twenty years.

The weather over the last ten days?
On the 27th of February we woke up with a layer of snow. 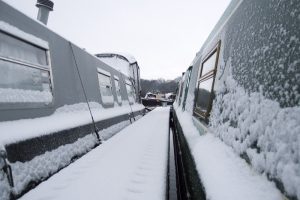 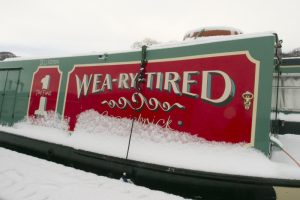 It’s beginning to look a lot…

On the 28th we were frozen in. There was a only a tiny bit of snow, and a 60 mph wind, blowing the snow over the ice in the marina. Inside the boat? When I woke up it was 9°C. 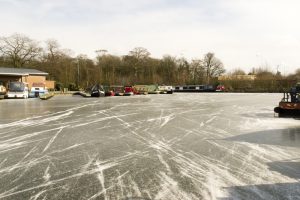 Then the weather improved. On the 7th of March it was absolutely beautiful. Sun, no wind, birds a-singing, just an absolutely lovely spring day.
One day later? When I woke up, and, as I always do, checked if we were still at the same spot as when I went to bed, I could only start giggling. 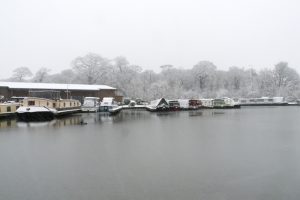 Snow again! When it finally stopped snowing, we had about 3 inch of the white stuff. 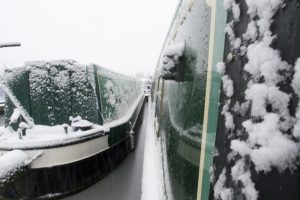 Up to 3 inch of snow

It was so bad, that two tiny birds tried to find shelter on the gunwales of Thistle Dea. They are difficult to see, I know, but I had to take this picture through the window. 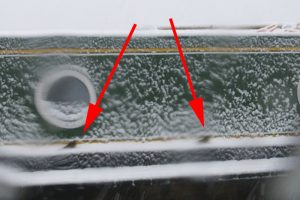 We still want to leave around the 17th. But this morning the marina was frozen again. No snow, no wind, sunny day; but ice means: no-go! So we have to wait and see. Hopefully the spring season will finally take care of the wrong weather.