Just as we set off from Braunston, I get an email from Annemarie. They are on their boat, for a couple of days. In case we’re in the vicinity…

Their boat, Dubbel Dutch (see Dubbel dutch) is in Crick Marina, our next stop.
How convenient.

After sharing the Braunston locks with an experienced hire boat crew, we have to do the Watford Locks* on our own. Well, not really, because there are volunteer lock keepers. 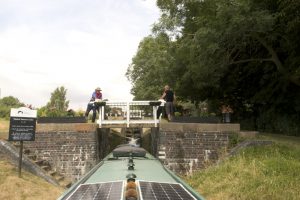 The volunteer on the left of the picture gives me a 10 out of 10 for cruising into this lock (while taking this picture) without hitting something.
Not the last compliment I will get today.

When we get to Crick, there is one space, just after bridge 12, and a lot of gaps further on, after the marina entrances. All the gaps are too small for us, but if two boats would just move a bit, we would fit easily. Lawrance is walking on the towpath, I’m steering the boat, and we’re both have a two-way radio.

A friendly request to move one’s boat just a bit, is met with silly stares. So in the end I radio to Lawrance: “Not a problem, I’ll just reverse back to the bridge.” Which is probably just what these boaters wanted to see. Him on the towpath, me on the tiller, and what is she going to do? Panic?

So I put WRT in reverse, and cruise all the way back to the bridge. It’s at least half a mile. There is plenty of water, so I reverse in a straight line, as if I do this on a daily basis.
Getting nearer to the bridge I get compliments from the two boats already moored there. And surprising faces when I tell them that nobody was willing to move.

After a visit by Christine and Christel (the same ones as last year in Braunston, see All these bl***y foreigners) Martin makes us fuel up in Crick Marina. And stay next to Dubbel Dutch for the night for free. 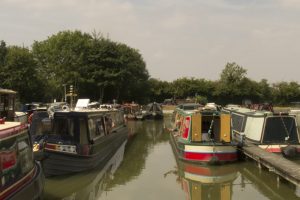 We have fun with the Smits, go out for a meal (they have a car), and leave the next day.