…but had no choice.

The Fire Is On! 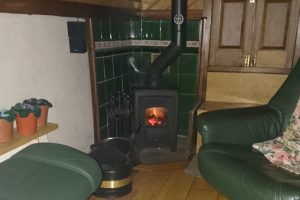 Much earlier than last year, or 2014, or 2016.
In these years we lit the fire in the first week of October. I didn’t record what date it was in 2015.
Only in 2017 we lit it early, on the 18th of September.
Hopefully lighting it early this year doesn’t mean we get a similar cold winter as 2017/2018. Especially considering the amount of berries etc on trees and all the busy squirrels we’ve seen…

It now is just too cold when I get up. I don’t like it to be 11°C in the boat, when leaving a cosy warm bed. I’ll be cold the entire day.
I can switch the central heating on for an hour. Then I’m warm, and the boat is warm when Lawrance comes out of bed. But it’s not on long enough to make the dampness inside disappear.

During the day, when the sun is shining, it get’s warm enough inside, but when it’s cloudy I have to switch the central heating on. Unfortunately central heating means inverter on (for the pump), so on a cloudy day means running the engine as well to charge the batteries. That’s diesel and gas, both expensive. Wea-ry-tired, so we can’t afford that.

It’s just that having the fire on means extra tasks: always keep an eye on the fire, filling coal scuttles, and emptying ash pans, and cleaning coal dust. So not having the fire on makes life a lot easier.
The fire on also means that the days with lady-like hands are gone; hands and nails will be black again for some months.

But after a day on the tiller, right in the smoke of the fire, I think I’m very tasty and will never go off. I’ll keep forever.

Of course the weather forecast predicts high temperatures again. But that’s only during the day. At night it will stay cold, at this time of the year.

This keeps the inside temperature on a nice 20°C. Unless, of course, it’s bright sunny outside and we’re not in the shade. Then it get warm (hot?) inside.

But that’s why we have side doors.