Day off in Llangollen

Nothing happens without a reason. I leave WRT at 9 o’clock and make my way to the village centre.
The plans are to take the 10:40 hr steam train to Carrog, have a look around, head back towards Llangollen but get off the train in Berwyn.
That’s close to the Horseshoe Falls, so I can visit them, and then walk back to Llangollen basin.

But as per usual plans don’t always work out well. 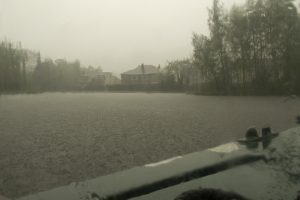 It’s raining heavily, to start off with, but that doesn’t stop me when steam is involved.
But when I get to the station I find out: No steam today, just a Heritage Railcar. 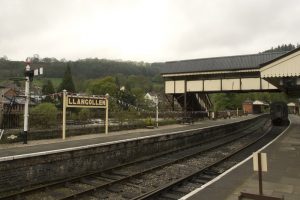 Well, a railcar is just the same as many trains I had to take in Holland. Not worth the £14.50 (senior’s ticket) I would have to pay. So cancel that. 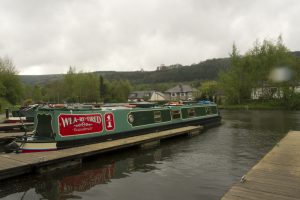 Obviously a lot has happened since we left the marina.
We travelled 125 miles, in just over 58 hours. More or less in very nice weather.
Nice weather means no rain, which means no water in the canals. Even now, at the start of the season, the pound between Henhurst Lock and Poolstock Bottom Lock was nearly empty already. WRT got het bottom pretty much scraped.

To make her feel better we took her out to a beer garden in Leigh.
A brilliant mooring, 20 seconds away from Aldi, and also close to a big Tesco and an indoor market.
Unexpectedly quiet, and two meals for less than £10! 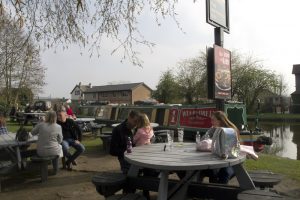 Moored up in a Beer Garden

We spent a couple of days in Middlewich, moored up at our favourite place at the offside of the canal.
I always wonder what the relation is between two neighbours, right opposite the visitor moorings.
Does one buy exactly what the other one has? Do they buy things in bulk?
Just look where the arrows point at: two (so to see) identical dressing table mirrors. 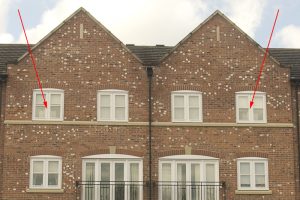 We see the now repaired Middlewich Brach breach, that kept us off the Llangollen Canal last year. 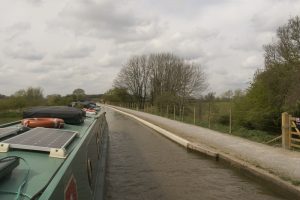 The next day (my day on the tiller, of course) is horrible. It’s freezing cold, and there is a gale force wind.
Going from Church Minshull to Barbridge Junction (2 hours) is just far enough.
We moor up opposite Gary and Julie, whom we haven’t seen for a while. 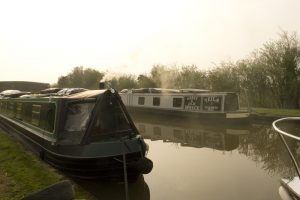 No need to mention that the next day the weather is fine again, as you can see on the picture above.

The nice weather stays with us from then on.
We stay in the arm at Whitchurch, where we do our first laundry on the go. And Easter we spend in the Ellesmere Arm. The weather enables us to have al fresco meals, but also brings out lots and lots of bypassers. Who all mention WRT’s name, trying to figure out what the name means.

It is very annoying, to hear your boat name every 5 seconds.
I’m getting so weary and tired of it that I can but bring the kitchen knife out; the next one will be killed…! (And suddenly it gets very quiet on the towpath.) 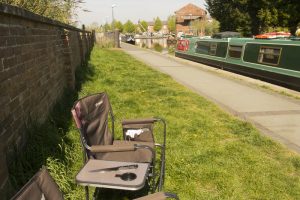 Murder on the Towpath

In the mean time WRT finds out that she is more or less a celebrity.
Has she been in the Tillergraph (July 2013) and in the Canal Boating Times (September 2017)? Now she is in the Easter Boat Gathering brochure of the National Waterways Museum in Ellesmere Port. Luckily Ian and Pam were there and visited us in Ellesmere with the paper proof.

One just wonders what that guy on the back is trying to say. Is it about a fish he caught? Or about the size of his willy? Or is he just saying: Look, without hands!

Anyway, up to Ellesmere I reckon the LLangollen Canal is hugely overrated.
It’s rural, but so are other canals. The scenery is not that much different from the Mon&Brec.
But I know, the best part has to come. Chirk aquaduct, for example. 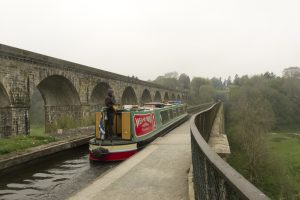 But this last wonder of the canal world wasn’t new to us. We’ve been over it before, see Not the last cruise.

Other than that, there are way too much hire boats, and most of them cruise way too fast, don’t hear one’s horn, cruise on the wrong site of the canal, try to enlarge the narrows, run full speed onto a jetty (and thus onto the bank), etc, etc.

I don’t know, but I think my favourite is still the Staffs&Worcs, with the Shroppie as a good second.