The first stop on our journey back home is Thrupp. At the Jolly Boatman we meet a couple and show them WRT. Only later we find out that he is Dutch. His comment?
“Now I know why your boat looks so tidy!”

To leave Thrupp we have to go through the (electric) lift bridge. Lawrance is on the tiller, so I have to read my way through the instructions.
“Turn BW key clockwise – follow instructions on the screen.”
Needless to say that after five minutes the screen is still blanc. Someone helps me out: “Just push the buttons!”

At one of the locks I meet another Dutch couple, on their own boat. I do like the Dutch touch of the interior (well, what I can see from the outside at least).

In Banbury we moor at bridge 168, to go to Morrisons. The Oxford Canal has too much weeds, not a lot of water, and next to no shops! 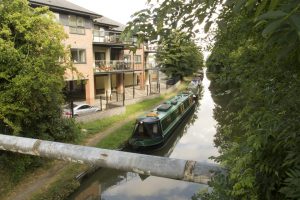 After two days we move to Banbury Centre. I want to buy a pair of shoes I’ve seen, last time we were here.
This must be our hardest cruising day ever. Half a mile, with a lock and a lift bridge!
And the next evening, around 21:45 hrs we make use of the advantage of living on a boat: we move, two boats up, just under Tom Rolt bridge. To get away from the very, very loud base noise from the house party at the club-cum-gym. Time to leave the city.

We start earli-ish. But at the third lock, Slat Mill Lock, Lawrance notices the propeller is pulsating. So we stop. The amount of (clear) oil in the engine bilge tells us: gearbox. Yes, the gearbox is completely dry. After speaking to RCR, and to engineer Tom we refill the gearbox, and Tom will meet us at Cropredy.
When filling up Lawrance realizes what the problem is: the filler level plug has only one thread left. At some time in the past (we think at Overwater Marina) someone broke the plug, and didn’t bother to replace it. Just put it back in, with lock seal. 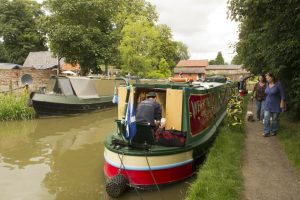 Tom, the engineer, orders a new plug, and we moor up at the last free spot in Cropredy. It’s already absolutely full, on the 24 hours moorings. And none of them is going to move, not before the 17th of August. They are all there for the Cropredy Festival. So we stay there as well. And if anybody causes troubles: we’re broken down, and waiting for a part for the gearbox. 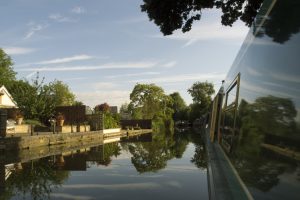 Cropredy in the morning

The filler level plug is sent to Cropredy Marina. We walk to the marina to collect it, Lawrance replaces the old plug, but we think that it is too late to leave that same day. While having supper at the Red Lion I see the guy from the Dutch boat again. Before we leave the pub I wish them a good cruise. In the end we all decide to moor up at Fenny Compton and have a meal together at The Wharf.