Lowsonford, 22-06-2016
After a long day of cruising (three hours!) and a lot of practising mooring up in awkward situations (because we are cruising behind two hotel boats) I moor WRT at Lowsonford. While doing that, a couple walks past us. We reckognize them. It’s the couple we were moored close to at Audlem and Market Drayton.

The next day at half past eight (Lawrance is still asleep) I move WRT to a sunnier spot: nose to nose with the ‘Audlem couple’, Pat and Stephen. 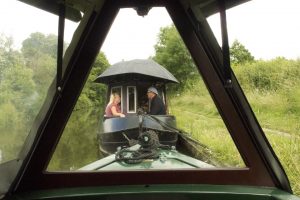 Probably the wrong thing to do. Me and Pat will sit outside on the towpath, and talk from 3 o’clock in the afternoon till eleven o’clock at night. OK, with a break of an hour for supper. She is in her purple period, and I give her a purple African Violet, Saintpaulia var. Cremus Bruleus.

So what is all that about crème brûlée? Well, it’s the name Pat and Stephen have for those boaters with shiny, immaculate boats (that only cruise a week every year), who don’t socialize with other, mortal boaters. The crème brûlée in the first part of the story, that’s us.
WRT is absolute shiny, and we probably didn’t say a lot, after all the hassle of getting out of Swanley Bridge Marina and through the first three locks of the Audlem Flight. But we gave them a wave when we left, and we spoke to them (albeit short) in Market Drayton, before going to the market.
It’s only now, here in Lowsonford, that Pat and Stephen find out that the shiny boat is caused by a very recent paint job…!

And yes, we talk to other, mortal boaters. Because that’s what we are.
So talk we do. One day Lawrance even finds himself upside down in their engine compartment, while I do another crochet course for Pat and Lisa (who is moored behind us). Later that night Fred (Lisa’s husband) explains to me how to make a Turks Head, which I manage to make early the next morning.

Brilliant days. This is what it’s all about (although the weather is changing).
Unfortunately, after four days we have to go. Not that we are in a hurry. No, it’s just that we have a completely empty fresh vegetables cupboard, and two completely full cassettes! We have no choice but to move on.

The night before we move though, the four of us have a meal in The Fleur de Lys*. No need to ask what we have for dessert… 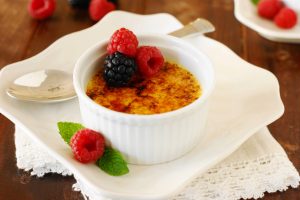