Last year we arrived at Warwick on the 29th of June. Soaking wet, absolute exhausted and ready to commit murder (see On the Motorway). This year it’s warm (getting up to hot), we’re a just bit weary and sorry to say goodbye to our lock partner.

Everything is different anyway. What we did in three days last year, we did in one day this year. Last year we had to stop at Shrewley for me to take one of my best pictures ever. 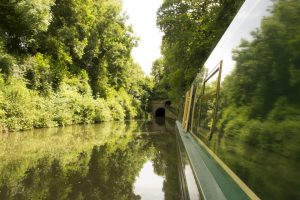 Then we had to stop before the locks to see what weird system the Hatton Flight had. This year the plans are to stop at the same spot as last year, which would be slightly good for the solars. But when we get there (before eleven o’clock, someone must have fallen out of bed), Lawrance decides to take the two-way radio and to walk to the locks. He radios me that we can moor further on, towards the locks.
I only remember gloomy, dark permanent moorings, but one can but obey. As I get to the spot it is indeed a permanent mooring, it’s dark and gloomy and we don’t really fit; we’re too long. So I tell Lawrance we’ll wait for an hour, to see if another boat shows up, to share the locks with.

Just at that very moment, a boat comes around the corner. Bit smaller than WRT. When I see the boat name I nearly decide to stay where we are: Mad Hatter. Instead of a crazy woman I now share the lock with a crazy guy?

No, not all, as I find out. Single boater, knows what he’s doing, gives me time to get into the lock without taking to much paint off (I can’t, most of the paint is off already…!). Together the three of us do the Hatton flight in five hours. OK, Lawrance and Les open and close paddles and gates, I only steer WRT and close the gate closest to me. 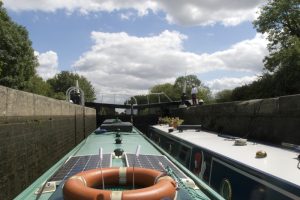 I know, we should have breasted up, like we did with Ian on the Wigan Flight (see Finally…!). But would you leave your boat in the hands of a unknown, and foreign woman? I wouldn’t!

In the mean time the weather has definitely improved. During the flight we take as much clothes of as possible, and after we moor up, it’s time for seats out, port and nibbles. Mind you, I had breakfast at 6 o’clock and had nothing after that but two cigarettes (to keep the hunger pangs at bay). 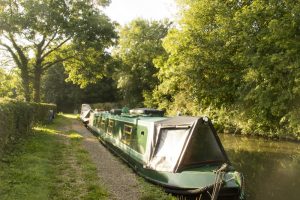 The end, there is no more

It will be quiet on the blog now, for a couple of days. Not because we don’t have wifi, or a computer that’s not charged. No, it’s because there will be nothing to write about. Only: went to the hairdresser, spent a day at the beautician (I know, with no visible result), played golf, went shopping. Not really interesting, is it?