As I mentioned in Don’t ask we cruised to Crooke Beer, Boats and Music Festival on the third weekend in September (read more about the Bridge 27A Boaters Club at the festival here). We leave Crooke on the Monday, and… it’s raining. I’m the tiller girl, and I’m  dressed in our bright hi-viz yellow waterproofs.

It’s an uneventful cruise back to the marina. Blossom and Tin Lizzie are with us, both being single boated, so we (well, today it’s Lawrance) can do the swing bridges for them. After we pass Burscough  we get to the swing bridge next to the pub/restaurant called The Slipway. Lawrance has jumped off the boat, and I’m hovering, waiting for the swing bridge to open. Then, sudden, from a boat to the left, the side door opens, and a woman sticks her head out. When we had the hire boat this would usual mean as shout like: “SLOW DOWN!”. This time it’s something completely different, and so surprising I nearly loose control of the boat for laughter. This lady shouts: “How are your Clark shoes?” I tell her they are fine, and with a very big smile I cruise through the swing bridge. 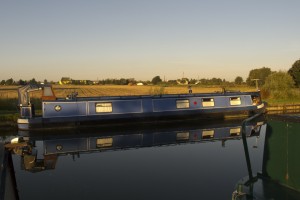 Out of the Blue

Although it was a blue boat that opened the side door, it didn’t came Out of the Blue, so to speak. A week ago I got new Clark boots, as an early birthday present from Lawrance. When Juliet, who sold us the shoes, was going to give me the box, I told here I didn’t want it. Living on a narrowboat, limited space etc.
So she mentions her parents-in-law, who live on a narrowboat as well. She tells us the name of the boat, and that they are moored near The Slipway. So on the way out to Crooke I’d already spotted the boat. 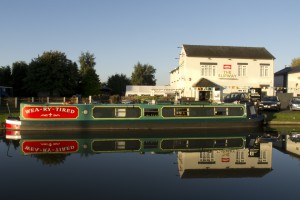 A week later, on the Saturday, we decide to go to The Slipway for a meal and a night out; the weather is too nice to stay in the marina. After mooring up in front of the pub I have a change to speak to Betty, the mother-in-law. She tells me her side of the story.

She got a call from het daughter-in-law, telling that she sold shoes to a lady on a narrowboat. No, she didn’t remember the name of the boat, but it was green. Two hours later Juliet calls again: “The boat is tired”, she tells her mother-in-law. Who replies: “What do you mean, the boat is tired?” Long story short, Betty lives at this mooring since 1999, and knows most of the boats that cruise regularly up and down the canal. Had seen a green boat (us, on the way out) with the name Wea-Ry-Tired, and instantly knew: that lady has new shoes. The rest is history, but even writing this now still brings a broad smile on my face…!

OK, so far about the shoes. Now for something completely different. I’ll post another recent picture (or better, two pictures). Have a close look at all the four pictures in this post, and tell me if you notice something. 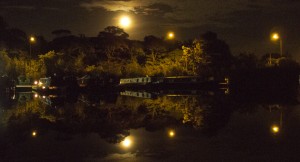 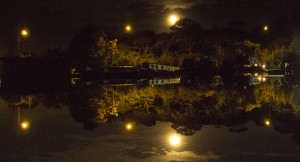