It’s a long time ago I took the time to write. It’s now a week before Christmas and a lot has happened.
First of all: my house is for sale. I’ve got a nice sign in the front garden, and there are very nice pictures on the internet on the main Dutch housing site. Viewers so far? None!

Once the house was on the market I went on a long trip with Lawrance. We went to Italy a couple of times, and to Poland. Eight weeks I was away. During one week we took some time off to have a look at future moorings. And had an appointment with a surveyor to check my boat specifications. In one of the marina’s we visited we met a boat fitter that is on our list. He basically made us change our plans a bit.
He gave us the advise to look for a second hand boat first, and have our own build later. This, plus the fact that selling my house might be somewhat problematic, plus the fact that nowadays it is a lot easier to rent out a house in Holland… So we made a list of the bare necessities, and now I start my day with a quick search on the internet for second hand boats. 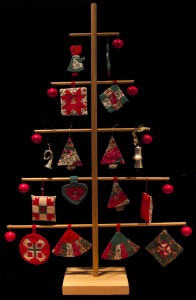 Today I plan to set up my Christmas decorations. I’m not sure about the Christmas tree yet. Although Lawrance is not a great fan of it, I still want to keep some decorations. Not the glass baubles, because they might break. But my (hand-made) fabric ones. With my dowel tree. Together that won’t take up much space on the boat, be it during the year or with Christmas. It’s not messy, because the tree is made of wood, it won’t break, and it is small enough to be acceptable for Lawrance. Two hand-made place mats will stay, as well as my Christmas quilt. If we have enough room I might keep some paper bells, because they are exactly the same age as me. And perhaps some cross stitch wall hangings. 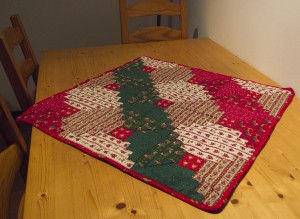 All the rest I will get rid off, after this Christmas. O, yes, I also had a look at the Christmas magazines again, the ones that survived the first round. And I think I can be proud: as of today there are two left, that I want to keep. For now, that is… Tomorrow I will have a look at my Christmas tree. No, it won’t make the boat. It’s old, falling apart and much too big for such a small space. But it might just be a nice touch for the (hopefully) last Christmas in Doorwerth.