Can’t write a script for this

Remember I mentioned that we are moored just opposite the Theatre? Well, that’s not exactly true. We’re about three boat lengths further away, right in front of Avon Bowling Club. 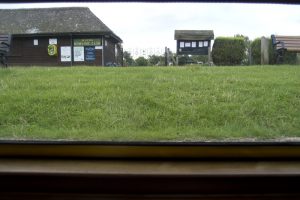 In front of the bowling club

Earlier this week a lot of seriously looking men, all dressed in something white-ish, and pulling an airline stewardess-like suitcase on wheels, arrived at the bowling club. A little later we see them, now and again, walking on the bowling green.

Lawrance, nosy as always, walks up to the gate to watch them play. Then one of the guys, Martin, approaches him and says: “Tomorrow at 2 pm we have Community Bowling. You bring flat soft-soled shoes, we provide balls, instructions, and tea and biscuits.”

Of course we can’t ignore an invitation like this, so early-ish the next day Lawrance is off to the laundrette, while I do next month’s planning, write part of the blog, and make a shopping list. Then, with half the (now clean) laundry still on the bed, we present ourselves to a guy named Peter.

Lawrance has played bowls before. I haven’t. I played Jeu de Boules and, of course, the similar ancient Dutch game of Klootschieten, which is only known, nowadays, in the north-west of Germany and in the region of Holland where I was born and grew up. So the first question is: left-handed or right-handed? Right-handed, as I soon find out. 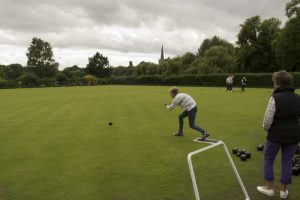 We get the basics about the green, the ball, the jack (small ball), the mat and how to throw, sorry, bowl the ball. And after some practising competition starts. Me and Lawrance are on rink 1, playing with Peter, who, as we find out, is the Club Captain.

It’s certainly not his day. I beat him, and Lawrance, in the first end (beginner’s luck?), and I’m a very good second (with two or three balls) in the next ends. Then it’s time for tea and biscuits. After that Lawrance beats Peter (and me) as well. 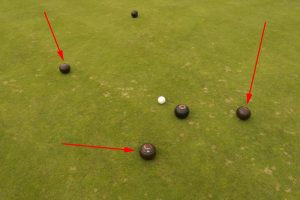 Can I get any more English? Yesterday I’m om a bell ringing platform at the church (visible from the bowling green), and now I’m playing bowls!

Anyway, we have a great afternoon. And go back to WRT with an invitation for later tonight. It’s the annual visit of the mayor (and the council staff) for a friendly game. While we’re finishing off our meal everybody starts to arrive (including the catering). 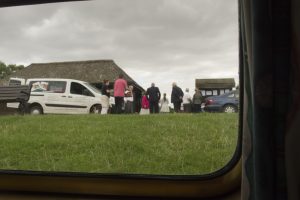 A dark blue Jaguar with the coat of arms of Stratford brings the mayor. Or mayoress, as it turns out to be, complete with chain. And, to our big surprise, even the leader of the the bell ringers, Charles, turn up. We just can’t believe our eyes!

When Lawrance is almost finished doing the dishes, someone knocks on the boat. Martin. That’s how we end up at the Bowling Club again. No, we don’t play, but talk to a lot of people, bowlers, the mayor Victoria, and Charles the bell ringer, who turns out to be the mayor’s secretary. 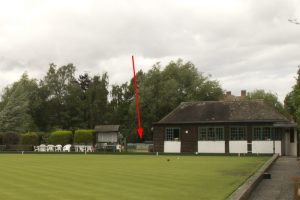 Do you see that green narrowboat?

Most used sentence? “If you turn around, do you see that green narrowboat?” And I start doing tours of our boat, for those who like to see how the other half lives. Even the mayor gets a tour of the boat. 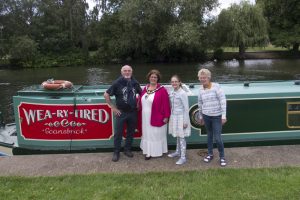 There are drinks, sandwiches, a raffle (we win a box of Cadbury Chocolates) and we become honorary members of the bowling club.

At around 10 pm everybody has gone home, and we’re back on WRT. Looking at each other, thinking: did all this really happen?