We have a tiny solid fuel stove, an AX. Or to be precise, an AX 1M-S2. By saying tiny, I mean really tiny. About a quarter (or less) of the size of my downstairs woodstove in Doorwerth. More like a stove for a dolls house. It’s so tiny that we had to buy a new stove toolset, because my Dutch one was twice as tall as the entire stove on WRT. 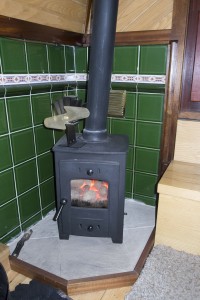 This tiny solid fuel stove is basically our main source of heat. I know, we also have (gas) central heating. But coal is a lot cheaper, and it is more traditional. So the central heating is for those days when it is only a bit chilly in the morning. At the moment it is cold enough to have the stove on all the time. If one manages to get the bloody thing running, and keep it running…!

Compared to the woodstove in Doorwerth, with a chimney about 6 metres high, the stack effect of our 2.2 m chimney is next to nothing. So especially on relatively mild, damp days, with a low atmospheric pressure, the stove is very hard to light.

Once it is up and running, it depends on the type of coal whether it keeps burning or not. We use smokeless coal, which still emits a lot of smoke when first lit. So far we tried six types of coal. And I know what you are thinking: coal is coal. No, this is man-made coal. Most types have the same oval shape, and are roughly of the same size, but they all burn different. Some are hard to light, others just burn down to some kind of concrete dust. Or they burn down to the size of a pebble, which is exactly the same size as the holes in the bottom grid. Therefore blocking the airflow in the stove. and causing the fire to die out.

It was after one of these sudden deaths when it happened. Lawrance is busy hoovering out the stove, the ash pan, underneath the stove and around it. I’m somewhere in the back of the boat. Suddenly I hear a loud BANG, and a big black cloud fills the boat. After a couple of seconds it sets off the smoke alarm in the saloon. I hurry to the saloon, one to switch off the smoke alarm, and two to see what is going on. But I have to run back straight away: the cloud now reaches the bedroom and sets off the second smoke alarm. Then, walking back towards Lawrance, I realise: I’m in for a serious cleaning job…

So what did happen? The bag of the hoover, full of ash, coal dust and remains of coal, did burst. And the hoover, with its outlet right in front of my new bookcase, spreaded the ash first over all my books, and then evenly across the entire boat (confirming that there is adequate ventilation on WRT).

There is now a layer of black dust on every horizontal surface (window sills, shelves, floors). It’s even in the bathroom. And, of course, inside the hoover as well. Cleaning out the hoover seems the first and easiest part of the job. But no, there is so much dust inside engine and filter that, as soon as we switch the hoover back on (after cleaning and re-bagging), another cloud appears, again sets off the smoke alarms, and covers everything with a second layer of dust.

Long story short, while visiting Lawrance’s older brother and his wife, we use their hoover to clean our hoover. And the next day I do an unexpected complete spring cleaning of WRT. Floor, walls, shelves and books, all regain their original colour, and WRT looks brandnew again.

Luckily we also found a type of coal that is easy to light and burns completely to ash. The stove has been going all the time, since the blow out. It’s cozy warm inside, and we don’t need jumpers, fleeces or woolen socks, with temperatures between 25 and 35°C. In fact, it’s a long time ago I’ve been so cozy warm.

But it was (once again) a steap learning curve…