I checked our time schedule, and found out that we would be in Warwick way too early. So there is a change of plans.
We’re not going on the Avon to Stratford-on-Avon and Warwick.
No, we go back to Worcester, do the Droitwich Canals (tick off), the Tardebigge Flight (again) and go to Birminhgam (again).

We have quite a variety of moorings: tripled up – single – awkward – without food. 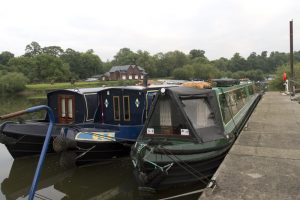 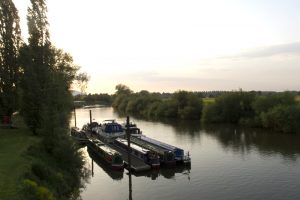 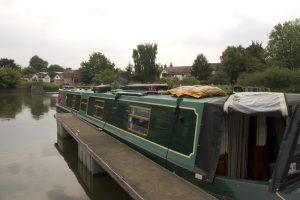 One day we have rain, one day we switch the central heating on.
Lawrance eats Maggots* and Mash in Upton-upon-Severn.
There is heavy rain somewhere, the Severn is on Amber, and the Avon is in flood.
We (well I, with the help of volunteers) do the first locks with side ponds.
Do the Tardebigge Flight again, with someone in front of us who opens a paddle of the next lock so it will almost be set for us (thank you).
I discover 20,000 unfamiliar living creatures on WRT (ants).
Fuell up at Anglo-Welsh for £0.90 instead of at Black Prince (£1).
Try to visit Cadbury’s but couldn’t get a mooring. 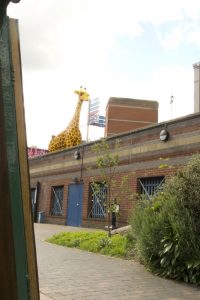 Moor up at Birmingham Sea Life Centre again, see giraffes, and do shopping at Tesco and visit The Distillery a couple of times.

*Birmingham Blues: from Out of the Blue – ELO 1977
*Maggots: Of course, the dish is called Faggots and Mash, but my brain immediately reads ‘Maggots’.