There is about a week between the Black Country Museum, and Stamppot Andijvie. With (once again) no time to write.

Leaving the basin at the Black Country Living Museum it’s my day at the tiller. We take the motorway (i.e. Birmingham Canal Navigations Old Main Line) to the centre of Birmingham: Gas Street Basin. 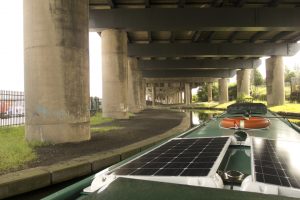 Although the weather is fine, underneath the motorway it’s bloody cold. 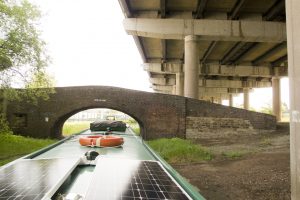 But it’s a lot easier to get to the middle of Birmingham by boat than it is by car. 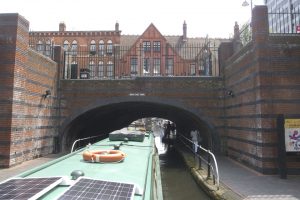 And it’s a lot easier to find a parking space. 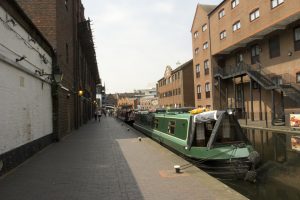 But is it The Place To Be? No, not really. There are only posh shops, and restaurants. All the students are in Prom dress (so we look definitely old and shabby). We’re moored right next to the entrance of a night club (that will be open tomorrow night). We have a drink at an old canal side pub, and have a delicious meal at Strada. 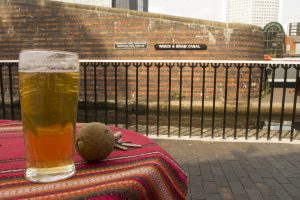 Then it is bed time. I hear nothing, but at around eleven someone bangs against the boat. Lawrance gets out, but there seems to be no damage. When I wake up at half past midnight everything is quiet.

The next day we take the opportunity to try to get yarn (no chance), books to read and sudoku books. Then we head south. 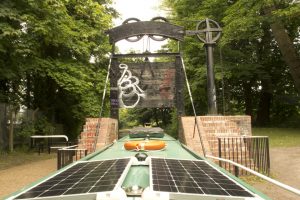 We enter the Stratford Canal via the only guillotine-gated stop-lock on a canal, and stop at Lyon’s Boatyard for fuel, gas, engine oil and Elsan Blue. The owners of the boatyard? The owners of Stealth, the boat that is moored next to us in Scarisbrick Marina!
We spend the night opposite the boatyard.

Our next stop is Hockley Heath. We have a look at a possible new car (there is a McLaren dealer in Hockley Heath), Lawrance checks the weed hatch (a very long piece of wire and a piece of lace), have a drink at the Wharf Tavern, and, after two nights, move to Lowsonford.

Lowsonford is only two lift bridges and 28 locks away. We start early. Lawrance is on the tiller, I’ll do the locks and the bridges.

I manage to do these bridges (just) and four of the locks (just); then I have to go on the tiller. The locks are much too heavy for me. As fellow boater/blogger and friend Ian words it: “I’m always amazed to see little bird-like women heaving away at lock beams, while some hefty geezer leans on nothing more substantial than the tiller.” Oh, if need be I would manage, but it will take weeks: I have to take the windlass off, after every quarter turn, reposition it and do another quarter turn. 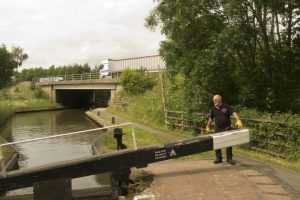 After just over 5 hours we moor at Lowsonford, have a delicious meal at the Fleur de Lys and leave for Wilmcote the next day.
Now we’re getting closer to the Tudors.

I do my first aqueduct, which (although very short) is very scary. Because once you’re on the aqueduct you can’t see the canal anymore. There are no walls on both sides, one just floats in the air… 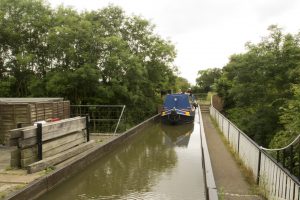 I get stuck in the odd lock.
No, don’t worry, I get stuck in one lock, called Bearley Lock or Odd Lock. The door doesn’t open properly and, like the stop lock at the end of the Shroppie WRT suddenly stops. And is truly stuck. She’s going nowhere, not forward, not reverse. 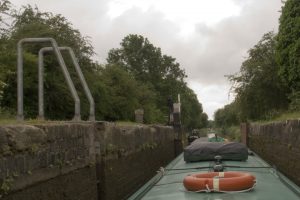 Stuck between door and lock

It takes another boat to push WRT back into the lock, so the lock door can be closed again. Then out comes barge poles and hooks to find the culprit. The two men never find all the stuff, but remove enough for WRT to get out. The whole manoeuvre (cruising out of the lock) takes us 25 minutes, and it is needless to mention that just (and only) during these 25 minutes it rains heavily… 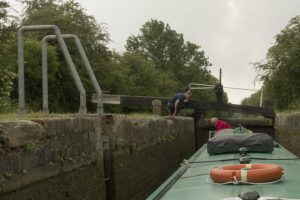 I do my second aqueduct, Edstone Aqueduct, which is a lot longer, and also very scary. Especially when it is absolutely windy, and the wind blows you to the side without any fence… 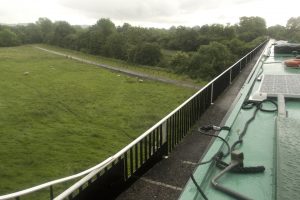 We stop at Wilmcote, have a drink in Mary Ardens Inn and do some shopping in the local village shop.