Back on the canals

After all these delightful days on the river Weaver it’s time to get back onto the canals. Our passage on Anderton Boat Lift is at 12:10 hrs on Sunday, so at 11:40 hrs we move to the holding moorings fro the lift. And wait, and wait… 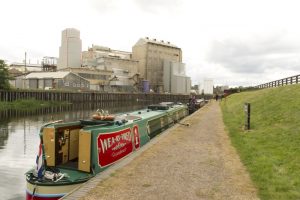 Waiting for the lift

At 12:20 hrs Peter tells us to get ready, and 10 minutes later we’re in the lift. There certainly is a difference between the basin nowadays and in the seventies, as these pictures show. 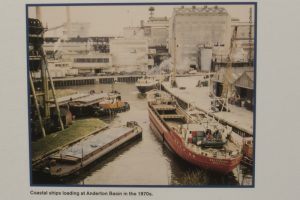 Situation in the 70’s 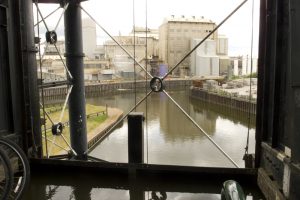 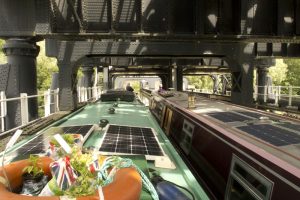 Ready to get out

Fourteen minutes later we’re ready to get out. Ann and Mick will stop at Anderton Services (and dumping our rubbish as well), we’ll just keep going.
It sure is a complete different cruising environment. The canal is small, overgrown, shallow, busy with boats (oncoming and sunken), people on the tow path, floating tree trunks. 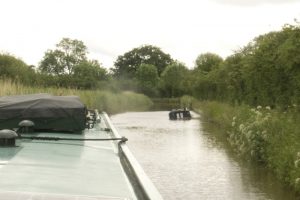 Bit low in the water…

It takes us just over four hours to get through Middlewich Big Lock and moor up. By then Ann and Mick are right behind us.

Monday morning me and Ann do the necessary shopping at Lidl before setting off on what will be our worst cruising day since ages. I’m the un-locky, so to speak, so at 10:30 hrs I start walking towards the first lock. I prepare the lock, expecting Lawrance to turn up straight away. No, no Lawrance. Instead of that the heavens open, and in seconds I’m drenched. Fifteen minutes later still no Lawrance, so I decide to close the lock doors again, and start walking back to our mooring place. Just as I start doing that, I see WRT’s beautiful nose slowly cruising around the corner. No, he did not break down. Although we discussed the night before that from now on all the locks will be single locks for a long time, Lawrance thinks the locks are double locks, so he waits till Ann and Mick start as well.

With the help of a volunteer lock keeper we get through the locks pretty quick, but at the third lock the heavens open again. Well, that doesn’t change a thing for me, I’m already drenched…

Once we’re past the last lock of the day (on the Middlewich Branch) I finally manage to change into some dry clothes, get a warm drink and get back to normal. Around two o’clock we arrive at Church Minshull. Way before everybody else, so we can moor close to the bridge, with lots of sunshine (if there was any, but you know what I mean: good for the solars).
Ann booked a table at The Badger, so at least I don’t have to do the cooking. After that it’s a relatively early night. Tomorrow Ann and Mick have to go, we don’t. And looking at the weather forecast, we probably won’t.

And that’s exactly what happens. For the first time since we have the boat, we stay where we are because of the weather. It’s cold; so I switch the central heating on. Winds will go up to over 40 mph, with heavy rain. So why move if you don’t have to? And, other than that, it gives me a chance to catch up with the weblog. But in the end the weblog is not updated…