A staggering 101 locks we did, after my last post on this blog. And 75¼ miles.
In 12 cruising days. That’s one lock per 1.34 miles, or 8.42 locks per cruising day. It didn’t leave me much time for doing other things than steering the boat or doing locks.

So today is B³ day: Bread – Blog – Brow day.
Although the bread making has to wait a bit, it’s too cold in the boat, at the moment.

I calculated, while in Stafford, that, at our current speed, we would be in Gloucester in about a week, which would be 1½ months earlier than planned. So a detour was necessary. A fine chance to tick off some more canals.

The Stourbridge Canal, for example. Nice canal, nice basin at the end, cheap beer (just over £2) in the local pub. 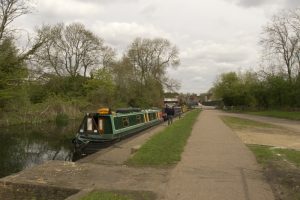 And Kinver Canopies, who are based in Stourbridge, put new zips in our cratch cover.

Then the Dudley no 1 Canal. With a lot of locks, but with volunteers, and a family (nanny, aunt and a young boy and his little sister) who enjoyed going up the locks in a narrowboat. 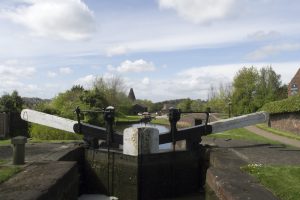 View from the flight

Mooring in the basin at the Waterfront was great. An extra day enabled us to go to Merry Hill shopping centre (for a fly screen for the back), lunch at Wetherspoon’s and supper there as well. 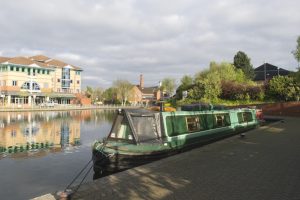 Listening to the bells later really made my day.

Next canal: Dudley no 2. To Hawne basin, where we had to stay a couple of days, because it just was too warm to cruise. 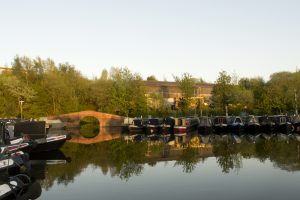 But perfect for all fresco suppers…! 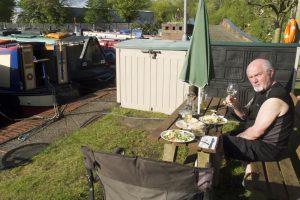 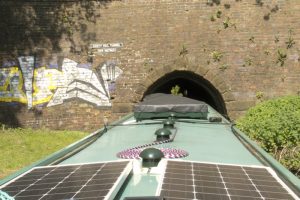 …and the biggest tunnel (Netherton)… 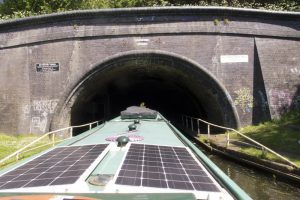 …took us to Birmingham. The suggestion to moor at the Sea Life Centre was a good one. Save, and relatively close to a Tesco. 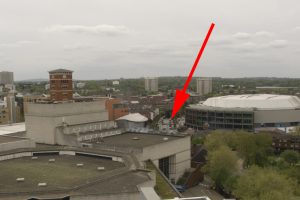 View from the library towards WRT

After visiting the Secret Garden on top of the library we had an early bird supper at Carluccio’s, a drink in The Brewery, and a jam session in WRT with Barry, who is a morris dancer and plays melodeon. 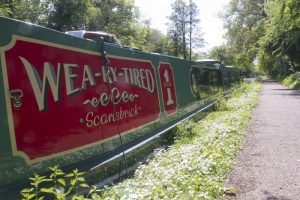 Then we pointed WRT’s beautiful nose towards the south. The Worcestershire & Birmingham Canal, which is famous for it’s Tardebigge Flight. Guess who’s day it was on the tiller? And who had to do the locks?

Well, you probably guessed wrong. It was my day for doing the locks, but the ground paddles were just way too heavy. So after two locks I was on the tiller, and Lawrance on the locks.

With 36 locks to do we had to find a fast way to work them. Which was: while I cruise into one lock, Lawrance walks to the next one, to fill the lock and open the gate. In the mean time I close the gate of ‘my’ lock, drop both gate paddles and jump back on WRT before she is too far down. Then Lawrance walks back to ‘my’ lock, opens the gates, and drops the paddles while I cruise into the next lock.

The statistics for the Tardebigge Flight (including the Stoke Locks) certainly alter the figures I gave at the start of this post: 36 locks, in 4 miles, that’s 9 locks per mile!

And more statistics: for 8557 yards we cruised through tunnels.
That’s almost 8 kilometres, of the 121 kilometres we did! In the dark, in the cold.
And, mostly, very wet.
Cruising at an average of 2½ miles per hour we spent 2 hours in tunnels. Anybody interested in taking up canal boating?

At the moment we’re at Tibberton, and WRT is nearly out of the shade.
Although it’s always (very) cold in the morning, with the clear skies (again!) it will be hot later on. Time to start making bread, before it gets too hot.

Oh, and the third B? The brows?
I like mine dark, so I started dyeing them myself, once in a while…