Yes, you guessed right. All the posts after the 14th of May and today are… written today (no phone signal so no hotspot – too hot – too many locks – too many friends – etc*).

But we had an added extra: tropical temperatures. Only six days out of the 38 had some rain. All the others had blue skies and very high temperatures. 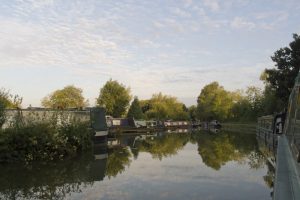 After spending a night at the end of the Welford arm, we first moored before Foxton Top Lock, but there was no shade whatsoever. So after visiting the Boiler House, and gongoozling the locks, we started the engine again and went down the locks, in search of a mooring under the trees.

My herb garden has died ages ago, WRT is covered in dust (again), and we’ve already spend a fortune on sun cream. I’m not really complaining, but…

Tomorrow we will set off towards Market Harborough. The weather doesn’t seem to change soon. Hopefully there will be enough water in the canals.

*I’ll try to write stories on paper first instead of having to start up the computer. Maybe that will improve the amount and frequency of posts a bit…