As far south as we’ll go, this year

Six cruising days, 37 locks, 19 bridges (of which nine were open) and 32 miles later we arrive at our first mooring in Oxford.
I could stop writing now; this kind of sums it up. But of course there is more to tell.

We have our first traffic jam for a lock. Not because it is busy, but because there is a piece of oak stuck between the doors. We are number eight in the queue; the first ones spend 2.5 hours before the problem is fixed. We are on our way after only one hour and forty-five minutes.
It’s hard to moor on the Oxford Canal.The weeds are very high, so we need our gangplank to get off and on the boat. 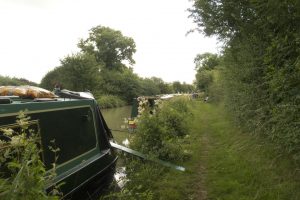 First Use of the Gangplank

Two days later we are number four in the queue for another lock: it only has one ground paddle to fill it. While on the look-out for oncoming traffic I realize that the boat that was moored up a little bit further on the canal, now is diagonal in the canal. But with nobody on the tiller! So in the end I help a guy in bathrobe to pull his boat back to the bank. Two of the three pins were taken out by a passing boat, while he was having a shower.

We find out that our gearbox seems to be leaking. Not a lot, so we think we’ll manage to get back to home base with it.
And we find out that our cassette lasts 25% longer; thanks, Pat, for the tip. No, I’m not telling how we do that, just send me an email if you really want to know.
I also manage to make three Turks Heads. 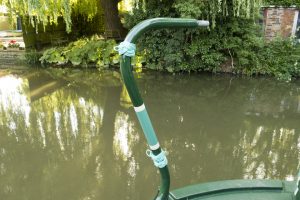 Two of them have an eye for attaching the flag of the person that’s on the tiller for the day. The bottom two act as a protection for the tiller when opening the cover for the weed hatch/stern gland. Thanks, Fred, for the tip.

The Oxford Canal has too much weeds, and not enough water. Well, the lack of water doesn’t affect us a lot, but all oncoming traffic gets grounded. At one sharp bend the oncoming boat (with a vintage engine, and cruising way too fast) just goes straight into the bank. I am on tick-over, and slam anchor as soon as I see him. I don’t think there would have been anything left on shelves or in cupboards… 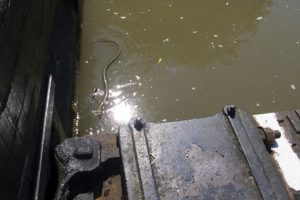 Sometimes one wonders if one is in the UK. One night we stop with view on the Rock of Gibraltar, and I even see a snake in a lock. 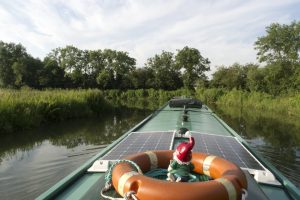 On the River Cherwell

We do our first river (Cherwell), trying to find out how to convert a coloured level indicator board into metres of head room. 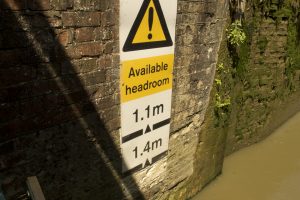 And I have to negotiate a diamond shape lock (without making a fool of myself). 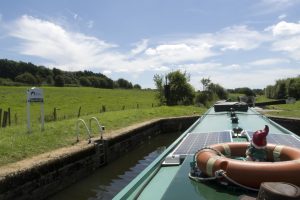 It gets hotter and hotter; sometimes it’s still 31°C inside the boat at 22:00 hrs. Where possible we sleep with both side doors open and have early starts (as early as 07:00 hrs) to beat the heath. I manage to get severe sunburn on my feet while on the tiller.

And all the time it feels like I’m on a morris event. 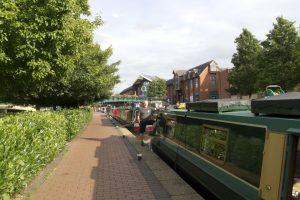 Adderbury, Banbury, Kirtlington, Molly Oxford and Weeping Willow Tree cross my mind while on the tiller or doing the locks, on our way down the Oxford Canal to Oxford. 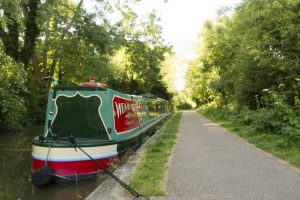