After our epic cruise into Liverpool, Bob says: “Let’s go to Chinatown for supper.”

Chinatown, China, flotilla… it sets my mind thinking: Can Magda’s Flotilla go around the (culinairy) world in seven days? Beat Phileas Fogg? Shall we give it a try?

So our first stop is China. In restaurant Jumbo City we have an excellent Chinese meal. And drink Tsingtao and Tiger beer. 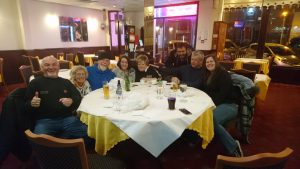 Our next stop is the Caribbean. Turtle Bay, to be precise. After some of us have done a sightseeing trip for about an hour, we enjoy cocktails, the Jamaican beer Red Stripe, and delicious Caribbean food.
I have a Vital Veggie Platter: sweet corn fritters, crispy okra, jerk pit grilled mushroom & peppers with spicy jerk, halloumi, mango flatbread, plantain and a super green salad. 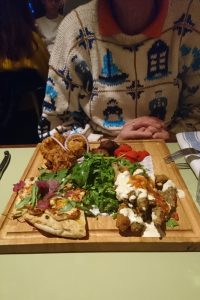 From the Caribbean we go back to the west, to South-East Asia. A buffet restaurant with food from Thailand, Singapore, Hongkong, China (and Italy and England). I stay mainly in Japan. I have a go at teppanyaki, with squid, scallops and lots of garlic, followed by sushi. After a quick trip to Singapore and Hongkong, I temporary end up in England. In Eaton, to be precise. Other flotilla members visit Italy, Germany and the USA.
The beer of the night is Cobra. 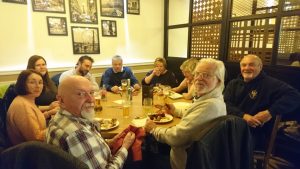 Lawrance’s Duck Croquetas and Bob and Linda’s Buttermilk Chicken are to die for as well. 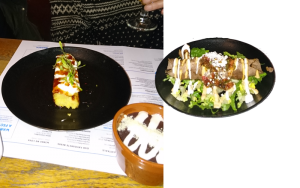 Food to die for

The only problem we have so far: we seem to hang about in the Pacific Ocean. Is it still possible to beat Phileas Fogg?

Probably not. Especially if the next stop is England. The Pumpout (sorry, but that’s what my mind makes of the name Pump House) in Liverpool.

The Pumpout, because it’s close to the dock, and tomorrow we are scheduled to leave Liverpool early in the morning.
The whole flotilla enjoys an excellent typical English meal. 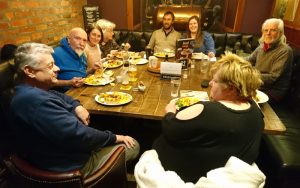 In order not to pay for our stay in Salthouse Dock we have to leave Liverpool on the 13th of March. But due to storm Gareth that doesn’t happen. CRT sends us back to bed.
So another chance to finish our world trip. But since the food at the Mexican restaurant is so good, and it is Marc’s birthday, we go back to Mexico. 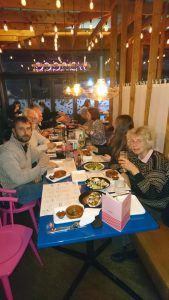 This time nearly everybody has the Duck Croquetas, even I have them. Together with the sweet potato & feta taquito and an absolute huge green salad, I have no room for any desert.

Since we’re still here on the 14th, we decide to end our trip around the world there were it began: in China. Same restaurant, more or less the same food. And no picture…!

But this is not the end of our trip around the world. Once we’re on our way back to the marina, we make a stop in England, at the Bootle Arms, and in Portugal (New Scarisbrick Arms). 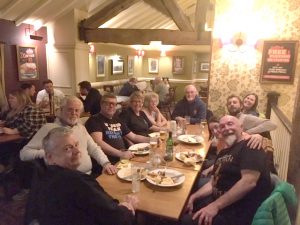 Around the world in twelve days. I think we did fine. And definitely beat Phileas Fogg! 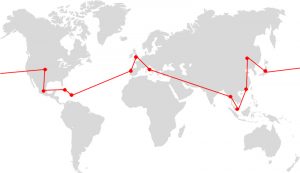