From Swanley Bridge Marina to Stourport Upper Basin is 66.5 miles by car; it takes 1 hr 58 minutes. Hardly a distance to mention. It’s 68 miles by boat, and takes about 10 days.
One would assume that, except for the name of the village one spends the night, nothing will change, on such a small distance. UK is UK. OK, there will be a difference between, say, Newmachar in Aberdeenshire and Hastings, East Sussex, (which is 604 miles by car) but certainly not between Kidderminster, Worcestershire and Stourport-on-Severn, Worcestershire (being 4 miles by car). But there are differences all over.

My first shower after leaving Swanley Bridge Marina left me with hair, suitable to use on a toilet brush: no curls, dry and absolute death. At the same time I thought I could smell the toilet. And the toilet bowl started to get an orange colour. While the laundry I did, and dried on the back of the boat, turned towels into possible floor boards.
After my first shower in Stourport my hair was back to normal: curly, soft and shiny. The toilet doesn’t smell anymore, and after I cleaned it, it’s still white. Because I had this experience with my hair before, I know exactly what it is: the water.

We’re used to do our shoppings at Tesco, so that’s what we try when cruising. Usually it’s not a problem to find what you want. The layout of the shops are mostly the same. But the assortment isn’t! Take for example whole wheat pasta. Try to buy that at Tesco in Stafford. Try to buy olio di peperoncini somewhere between Scarisbrick and Kidderminster. You can’t.
Of course it takes hours to find everything on your list at, for example, Sainsbury’s, or the local convenience store. But that’s part of the fun.

You stop for the night (or a day or two) at places where you think: Oh, I could live here (Kinver) and places that would be the last on your list (Kidderminster, 6 miles south of Kinver). Then you go 4 miles further south, to Stourport-on-Severn, and it feels like home again.

Well, saying that, this inland waterways’ most magical experience, as Pearson’s tells us, is really something. The yachts in the Basin, the sound of the bell tower, and the nice weather make me think I’m in Italy. 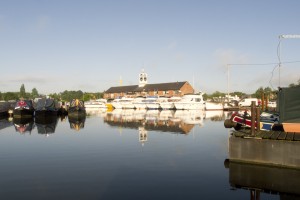 And because I’m reading Donna Leon’s books about Commissario Brunetti, it’s hard to believe I’m in Stourport-on-Severn, and not in Venice.
I even found local mosaics. 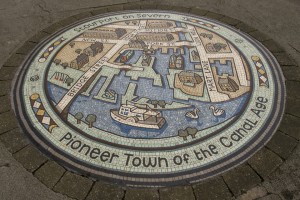 Although I don’t think Venice has locks the way Stourport has. 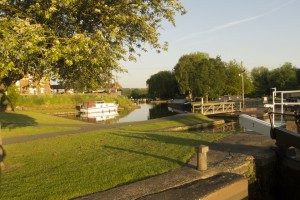 Towards the river Severn

But, if you were in Venice, you would not understand the people, you probably say to yourself now. Correct, but I can hardly understand the natives in Stourport either.
I can hear them better though, after I went to the nearest medical practice, registered myself as a temporary patient, and had my ears syringed… 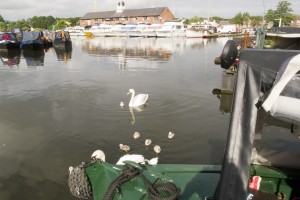 That’s another thing I found out: the more south of the (Scottish) border I get, the least I can understand the locals. I wonder how far south I need to go before I’m totally lost…