And then there was silence…

All the way up till today.
I know, it doesn’t look like I didn’t write, but I certainly didn’t.
All the posts between the 11th of August (Complete the opposite) and this one are written today. The reason for this? Too busy, no internet, computer not charged, not a lot of pictures, etc etc.

At the moment me and WRT are on our own. Lawrance is off to Scotland. Time for me to do my Self Assessment for HMRC (two days ago), do the accounts (yesterday) and catch up with our adventures (today).

What I did do while we were still cruising, though, was the statistics.

First this year’s map. The parts in green are our travels on a river. 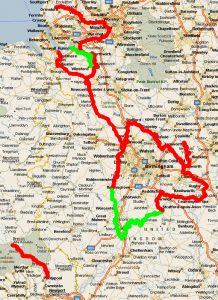 I know, once an accountant, always an accountant. So now I have to look at all the numbers and find explanations for the differences…