About half a mile from where we are moored is a green field, You can’t discern it from here, but it’s maize.

Ever been in a maize field? Except for doing things only satellites and God can see? Things that neither God or the farmer would approve off? (Or your parents, that is…)

Well, here is a picture of WRT, taken from inside that maize field. Me and Lawrance actually paid for going into that field, and no, we didn’t do things we should not do. 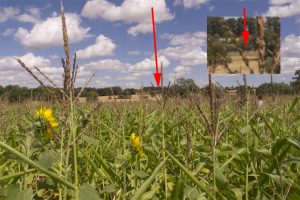 WRT from inside the ma(i)ze

We’re in an amazing maze in the maize. Wistow Maze, to be precise. Build every year, and every year it has a different lay-out.
This year the maze has three miles of paths, in the shape of an ambulance. To commemorate the 70th birthday of the NHS. 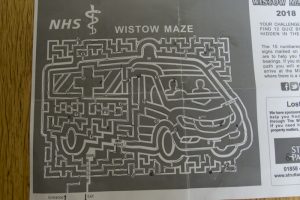 Hidden in the maize are twelve quiz boards, with a multiple choice question about first aid.

After paying our entrance fee we are allowed to chose a map. One has all the quiz boards marked up. So you only have to walk to the boards. The other map is just a map of the maze, and you have to find the boards yourself. Needles to say that I opt for the last one. The real challenge.

So we walk more or less the entire three miles. Find all the boards, and get all the answers to the questions right as well. 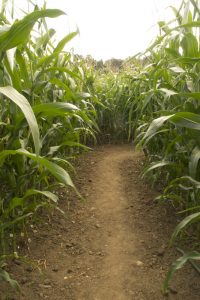 The maze is open (i.e. the maize is high enough) from around the 20th of July. It closes at the end of September, when the maize of the maze is converted to animal food.

If you’re ever on the Leicester Branch of the Grand Union in summer, moor up at bridge 79 and visit the Ama(i)zing Ma(i)ze in the Ma(i)ze. It’s worthwhile.

Opposite the maze is Wistow Rural Centre, with a cafe/bistro, garden centre, shops. And a model village, complete with train and a canal! It even has locks, and a narrowboat in the canal. 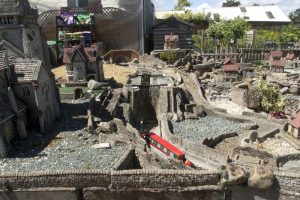 Unfortunately, like a lot of the canals at this moment, there is no water in the canal in the model village.

Although… There might be right now.
WE HAVE RAIN. 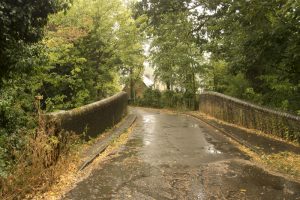 And thunder, and strong winds. It’s so bad we even decide not to move today!

And it get’s cold. During the last month I considered 27°C in the boat a nice cool temperature, at 22:00 hrs, when I usually go to bed. Because most of the time it was 30°C. Tonight it is only 20°C. No surprise then that I will sleep till 7:30 hrs, the next morning.

The rain we have so far doesn’t really increase the water level of the Grand Union around here. On the contrary. We will loose another four inches during the night. So when we move tomorrow the lack of water, and all the reeds and water plants will still cause to overheat everything: the engine, the batteries, and possible Lawrance’s temper as well.

*I do know how to spell amazing correctly…

One thought on “Amaizing*”