You know what just happened?

SOMEONE TOOK A SELFIE!!!

Of her, the boat and… THE HERB GARDEN!

A bit like this (but this is not the aforementioned woman, the picture is not a selfie and it is taken the next morning): 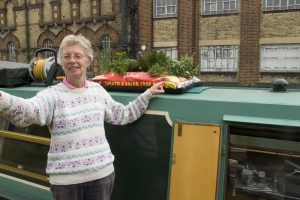 This is getting ridiculous. Everybody mentions the herbs, stops and looks at them, takes pictures, and now this.

And no, as you can see, there is nothing interesting at the other side of the boat. The ugliest part of the old Osney Power Station. A nondescript house on the other side.
And the women didn’t look like she would be interested in old architecture, or would know anything about it.

There is one good thing about it, though: I haven’t heard the mumbling of our boat name very often lately. Even with all the people walking past every hour of the day, on the towpath/street.

But just imagine, first they stop at the herbs, to point at, admire and take pictures. Then they walk a couple of steps, stop again and read out the name. Or vice versa, depending in which direction they are heading. And in the mean time they also look into the boat, of course (forcing me to keep the boat tidy at all times…).
It would just create a traffic jam, and more people to have a look, and…

About mentioning WRT’s name, though, I have a suggestion of a different name.
Being moored up at Abingdon Weir made me think: weir, sounds like we’re, sounds like wear (if followed by an y, of course)… 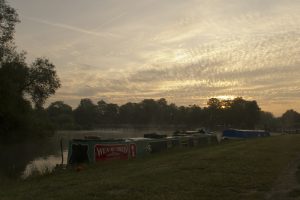 Now people still think we’re weary and tired (which we are sometimes, of course) but I wonder what they would think of Weir-eTired.

An electric boat (eTired, like eCigarette), or bought via the internet (eTired like eMail)?
Weird and Tired (not too far from reality either)?
Tired of E: everybody being on their phone all the time?