A pint of yellow submarine

No, I’m NOT on the green stuff, or drunk (yet), and there are no yellow submarines in the Leeds & Liverpool Canal, as far as I know. And if there are, I sincerely hope they don’t have a small drill to drill holes in the bottom plate of narrowboats…

Some time last week Lawrance said: Do you fancy going to the Saracen’s Head, on Saturday? And about a day later: Shall we invite Peter and Leslie for a bit of a cruise? There is some serious logistics involved: they leave their car at the Saracen’s Head, I pick them up with our car, so they can go home later, while we stay in Halsall.

Everything planned, the weather deteriorates, as is clear from both the weather forecast and my new barometer (see 50 Ways to lose…). The barometer drops, and drops, and drops. Early Saturday morning we phone Peter to remind them to wear warm clothes, suitable for rain as well. This probably is too much. Half an hour later they cancel their visit (softies). And, to be honest, we postpone the trip as well. No, not: Softies…!, but why be in the marina the entire week when it is sunny, and go cruising when the weather will be absolutely horrible? So we change our plans, do shoppings and the laundry in stead.

On Sunday morning the weather is still the same: a lot of rain. So we postpone the plan to Monday, and I get my computer out to start working for one of my clients. Then, around noon, the weather suddenly changes. The sun comes out, and it gets a lot warmer. So at two o’clock we decide: I’ll empty the cassette and get rid of the garbage, and Lawrance will do the daily engine checks. 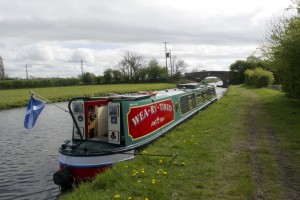 At three o’clock we start. In bright sunshine, with gusty winds, so Lawrance has some problems to get out of our part of the marina. WRT doesn’t seem to be happy either. Even before we’re out of the marina I already hear a sound I’ve never heard before. To my dumb blond ears it sounds like one of the belts, but Lawrance did do the daily checks, therefore I assume he has checked them. So once we’re on the canal I ask Lawrance to check it out. But, lo and behold, at that moment the strange sound stops, and the engine looks OK. Half a mile later, with me temporary on the tiller again because Lawrance is on the phone, the sound is back. Once again Lawrance takes off the engine cover… and immediately signs me to moor up and stop the engine.
We have a breakdown, less than one mile away from our berth in the marina! 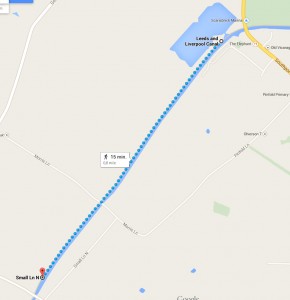 Less than a mile from home

We’ve got a leak. A serious one, because the engine compartment is full of water.
But it doesn’t take long before Lawrance finds out what is wrong. The end cap of the gearbox oil cooler came off. He fixes it, refills the engine with water, and after 45 minutes we’re on the move again. The plans were to go to the second winding hole after the marina, but we decide otherwise. We turn at the first one, and more at the Saracen’s Head. We have a quick look at the engine, before we switch off.
And discover another leak: now in the end cap itself. 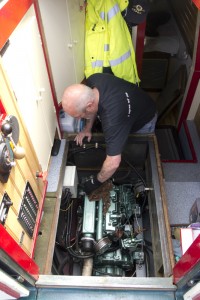 Isn’t it sheer fun, cruising on a narrowboat? We cruise 3.7 kilometres and break down twice! This time, though, Lawrance can’t fix it, because we do have all kinds of spare hoses, clips and belts, and an end cap for the engine heat exchanger, but not a small one for the gearbox oil cooler. Luckily we are a member of the RCR (something like the RAC, or the Wegenwacht, but for boats). And after making the necessary appointments we’re off to get a Yellow Submarine. For me, that is, half a pint (real ale)…

We have an excellent meal, and make our way back to the boat. We see a man, standing next to our boat, and a woman, a bit further on. She’s on the phone.
The man asks us: Is this your boat? Yes, it is.
There is a bit of confusion here. These people know the boat, and assumed Andy and Christine had a meal in the Saracen’s Head. They knocked on the boat, to see if they were in. And, getting no answer, decided to phone them, asking where they were.

So Christine (via the phone) and I (face to face) explain the situation to the couple. I wonder, how many people will, in the future, knock on the boat, expecting to see Andy and Christine, only to meet complete strangers? All thanks to the name of WRT, a name that everybody seems to remember for years?
After that we definitely need an (inhouse) night cap. And call it a day.

It’s 09:30 hrs when a small blue car arrives at the Saracen’s Head’s car park. Out comes a man in a boiler suit. It’s Jim, who’s going to fix our water leak. But, although we explained to RCR what the problem was, so he would have the right end cap with him, he doesn’t. But he finds a solution around it. 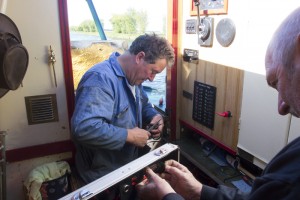 The solution around it: cutting off the leak

He also confirms that I was right in my assumption about the sound I heard, thus at the same time confirming that I’m not dumb (which I actually can prove), and I’m not blond (anymore). It was the sound of a belt. Not caused by a problem, but when the belts get covered in antifreeze they start making a squeaking sound.

At 10:45 hrs we’re on our way. It’s sunny, but also a bit windy. Since I’ve done it now many times before, I ‘sail’ into the marina, without even touching the (small) entrance. I also ‘sail’ into our part of the marina, expecting to get at our jetty without any problems…

Wrong. One gust of wind, and I’m at the top of the jetty, sideways. 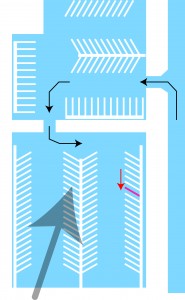 Sideways against the jetty

Luckily, when I reverse, WRT decides to cooperate. She turns her head into the wind, and slowly but surely I get her into berth 27.

Home again. Landline on. We empty the bilge, and do the dishes.
Next time we walk to the Saracen’s Head?

P.S. Did you notice the Scottish flag in the picture of the boat at bridge 26? Lawrance just got it a couple of days ago. While preparing the picture for this post, I realized it was the very first time we were cruising with the Scottish flag instead of the Dutch flag.
I wonder, was this breakdown WRT’s way of saying: I don’t like the Saltire…?