On the Wednesday we exchange the charming Black Forest for the depressing surroundings of Weavers Wharf at Kidderminster. We moor next to Tesco, but I don’t like the place. I’m afraid I will wake up in he morning and find WRT covered in graffiti.
That’s not the case, but later I’m told that hire boats are advised NOT to stop at Kidderminster… 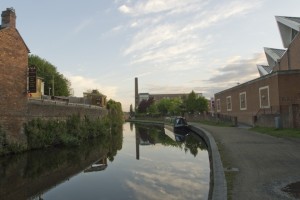 But it is perfect to do shopping at Tesco: we can take the trolley all the way to the boat. And no, WE DON’T DUMP THE TROLLEY IN THE CANAL AFTERWARDS…!

So after one night we start heading for Stourport-on-Severn. The weather is overcast/sunny to start off; I’m on the tiller. Once we’re past the first two locks Lawrance gets inside to have his lunch.

I hear a strange sound. It sounds like something metal vibrating against metal, because of the vibration of the engine. When I go into neutral the sounds disappears. But is back as soon as I speed up again. And not much later I hear something metal falling onto something metal. I can hear it even with the noise of the engine. And it comes from the engine compartment. Immediately I steer for the towpath, and see in the corner of my eye that the alternator light comes on. I press the horn to get Lawrance’s attention (we still have to get a new telephone between tiller and galley) and I moor up.

Lifting the engine cover reveals the problem straight away: the pulley on the water pump has sheered off. This means no water pump (so no cooling) and no alternator (because the alternator belt runs on the same pulley). Time to phone River Canal Rescue. 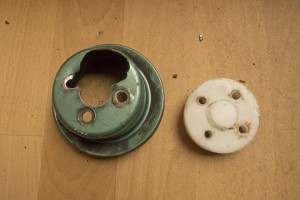 I remember bridge 10 but not bridge 9, so I guess we’re in the middle between these bridges. RCR tells us that they will send an engineer. When he will be here is not clear.  They will also try to find someone to tow us into Stourport, but this might take at least 48 hours.

So we start towing WRT towards Stourport ourselves. Of course it starts raining now.
The first bend and bridge we pass without problems. But at the next bridge there is a boat moored on the towpath side, and it has an enormous tall TV-aerial. Lawrance gives WRT a final good pull, I jump on, and we hope she will miss that boat (which she does), and stay on course (which she doesn’t). So I end up using the barge pole. Which is not of any use; I hit only mud, never reach the bottom of the canal, and have extreme difficulties to get the barge pole out of the water again. And of course, at that very moment there is a boat coming…! 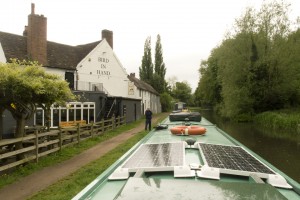 After 0.8 miles we reach a pub, The Bird in Hand at Upper Mitton. Just before that RCR phones again: The water pump/alternator pulley is NOT part of the engine. So the problem has nothing to do with the engine and they are not covering the costs. Lawrance tells them that he thinks the entire water pump is gone. They tell us to go to Stourport boat yard and get a new one. How, we ask ourselves? Yes, we can start the engine, but we won’t get very far, with a water cooled engine and no water pump. After a long (and loud) phone call they tell us that an engineer will see us tomorrow morning at ten o’clock. So we lock the boat, and go for a beer and a very good meal in the pub.

It’s well after ten at night when we get back on the boat. Lawrance gets involved with the locals and plays darts.

The next morning (Lawrance is still asleep) the engineers turn up. At 9 o’clock, not at 10 o’clock, as they told us. One of the guys stays, and him and Lawrance tow WRT all the way down to Stourport, with me on the tiller. Again a distance of 0.8 miles. 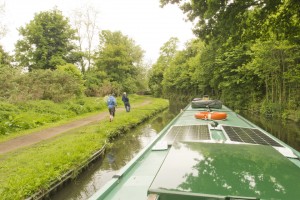 We temporary moor at the CRT Services, waiting till the work boat from the boat yard gets in to tow us to a jetty in the marina. 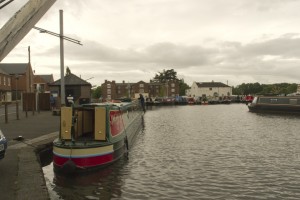 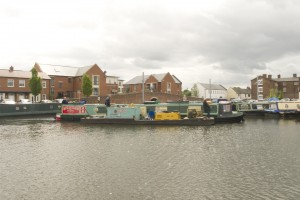 With a little help from a friend

And here we are. On a floating jetty in Stourport Upper Basin. With electricity, so we have hot water. The engineer, called out by RCR manages to convince RCR that we need a complete new water pump. It’s ordered, and the engineer will get it on Monday or Tuesday. It seems that we might get some of the costs back… 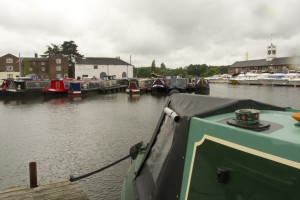 In the mean time we have to enjoy this. Pearson’s Canal Companion says:

To moor in the Upper Basin, listening to time being measured by the quarter beats of the clock tower’s sonorous bell, is one of the inland waterways’ most magical experiences.

One thought on “A magical experience”