No water? No narrowboats? History? Literature? Cooking?
What happened to this weblog?

Don’t worry, WE have lots of water. And we still cruise on WRT.
The title just sums up the last week.

Probably due to the fact that there was no boats coming down the locks because of the fallen tree, there is hardly any water in the canal close to Leicester.
Not that we have a problem as such. It’s just the boats in front of us, or oncoming, that are deep and are going nowhere. 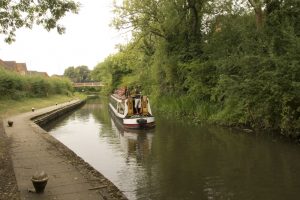 The King, mentioned in the title is Richard III, the one who couldn’t be bothered to follow the signs all the way to his battlefield near Market Bosworth, and fought his battle at the wrong place (see Sent to Coventry). Maybe that’s why he ended up under a council car park for nearly 500 years. We see his tomb in Leicester Cathedral.

I’m not entirely sure if I like Leicester. The moorings are fine. Tesco is very close.
And the remains of the medieval city, close to these Castle Gardens Moorings, are nice. 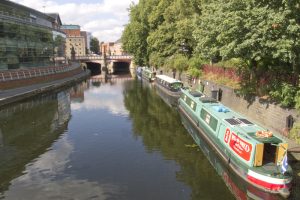 Newarke Houses Museum is interesting, as is New Walk, the tree-lined, 200 year old, pedestrian lane that leads to the New Walk Museum and Art Gallery. 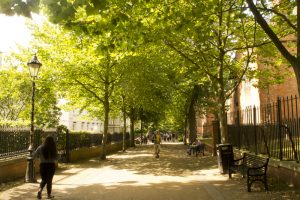 The museum is a waste of time, and full of kids.

The INDOOR market is mostly OPEN, and doesn’t even have spices and herbs.
The Guild Hall is kind of interesting, but hard to visit: it’s filled with three layers of kids.

I do like the street lights in Leicester, though. 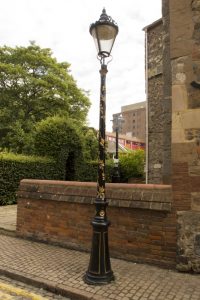 Our next stop is Syston, where Terry Pratchett suddenly pops up. No, not Terry himself, but a wrapped boat with scenes that remind me of his books.
When I see a row of Nac Mac Feegles (Wee Free Men) on the top box I know I’m right. The owners are huge fans. 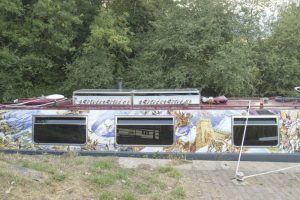 We’re moored at the The hope & Anchor. As per usual there are lots of gongoozlers. This time I get a question I never had before: “Does she have a reverse?”

With the Terry Pratchett fans, and all the local boaters, we have a nice night.

Oliver Cromwell appears at our next stop: Loughborough*. Again, not the man himself, but the 70013 Oliver Cromwell, a BR Standard Class 7 4-6-2 steam locomotive, built at Crewe Works in 1951. 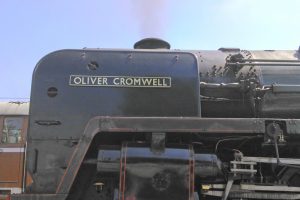 In Loughborough is the main station of the Great Central Railway. A double line railway with heaps of (working) steamlocomotives, and a festival, just now we’re here. Reason? Next weekend it is fifty years ago that steam locomotives were last used pulling regular trains. The Oliver Cromwell was one of them. 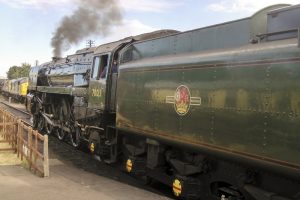 So while Lawrance does the laundry, I ride steam trains. Unfortunately, after three pictures the battery of my camera decides to be empty, so I have to take pictures with my phone…

It is still hot. Too hot to cook. 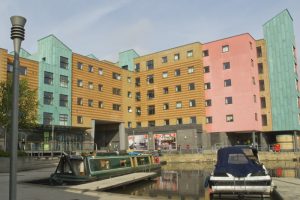 Luckily there is a restaurant, right at the basin in Loughborough. How inventive: it’s called The Basin.
It’s a Chinese/Japanese/Thai restaurant; very popular, because it is good and cheap. I decide to try a Moyashi Ramen. Beansprouts, stir fried mixed veggies and tofu, served with buckwheat noodles. To be eaten with chop sticks. We both ask for a knife and fork, but I manage to eat everything with my chopsticks, although it is 19 years ago when I was in China for a month and had to use chopsticks every day because they didn’t have anything else…

I write all this, moored up at Trent Lock. 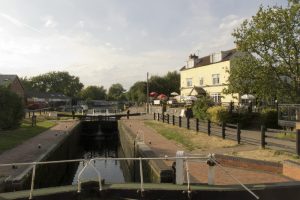 Back at Trent Lock

A place where some, so called, continuous cruisers spend half their cruising year.
Oh, they think they have a good excuse: the Trent is in flood.
I don’t know. The Trent is calm as a mill pond… 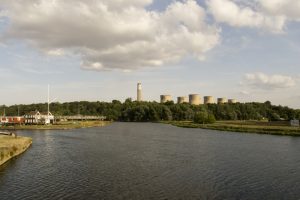 *Loughborough is pronounced Luff-burra, by the way.