No, not your lover, your chimney. And no, we didn’t lose our chimney, but Bill did.
It was one of the many highlights of our stay in Salthouse Dock in Liverpool. Others were (in random order): the morris dance performance (with it’s huge audience), The Pump House, speaking Dutch, buying a clock and barometer, the Maritime Museum, and the mooring spot.

To start with the latter, we’re on a floating pontoon in Salthouse Dock, the second dock built in Liverpool, opened in 1753. At one side is Liverpool One, the shopping Centre, where once was The Old Dock. This Old Dock was the first commercial wet dock in the world, opened in  1715. It changed Liverpool forever, because, being non-tidal, ships could be loaded and unloaded in three days, instead of three weeks. So Liverpool became THE port in England. But the dock became too small for the ever growing ships, and silted up, with sand and sewage. In 1826 it was closed and filled in completely. A customs office was built on the site. When starting to build the shopping centre, they discovered that all the dock walls were still there, and in good shape. Nowadays you can visit a small part of the Old Dock.
Don’t worry, it doesn’t smell. The sewage was excavated! 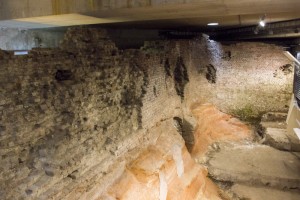 On the other side of Salthouse Dock is Albert Dock. The old warehouses around it are transformed into boutiques, restaurants and luxurious apartments. Not apartments for ordinary people, but for the one’s that drive Lamborghini’s and Porches. 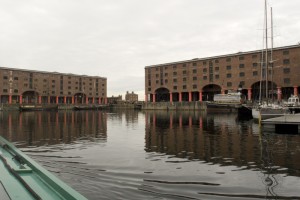 Albert Dock (on the way out)

Next to Albert Dock is the Liverpool Wheel, and the view from our boat is stunning, especially at night. 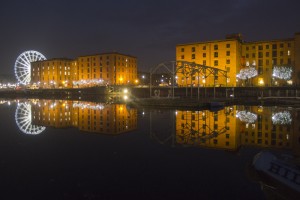 We’re surrounded by musea: the Museum of Liverpool, Tate Gallery, the Slavery Museum, the Customs Museum and the Maritime Museum. I spent five hours in the Maritime Museum. And could have spent even longer, if they hadn’t brought in about 20,000 families with children…! So an advice if you want to go to Salthouse Dock: avoid school holidays. The World Museum (20 minutes walk) was even worse. Children just used it as a playground.
Tate Gallery was a tad too modern for me, but the Liverpool Museum again was interesting.

Before we left Scarisbrick we had done our shoppings, so we could make our own meals. But why should we, with something like sixteen restaurants in and around Albert Dock? Well, because not only it was school holidays, it also was the weekend of the Grand National (the most important horse jump race, at Aintree Race Course near Liverpool). The race course, next to the canal, is just visible from the boat. 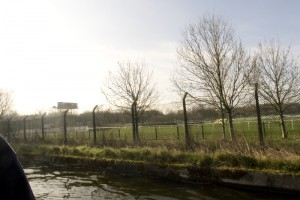 The first restaurant we went to on Thursday said: Have you booked a table? No, we haven’t. Then we’re sorry, but… The restaurant next to it: Have you booked…? Eh, no. OK, the first available table is at 21:00 hrs. The next restaurant actually did have a table for us. But we should have realized that something was wrong here. I had two small courses, Lawrance had a normal meal… on a plate the size of a plate in a doll house. And it contained something that looked like a piece of plastic. OK, he did get another meal for free (with the same kind of plastic in it). We paid £34.80 for food and drinks, and decided to do our own meals till after the weekend. So another advice: don’t go to a restaurant called Circo. Good restaurants are (we think): Pan Am, Blue, and The Pump House.
The latter is a pub cum restaurant, which has good food, not too expensive drinks and a very friendly staff. It’s packed, all day, every day. 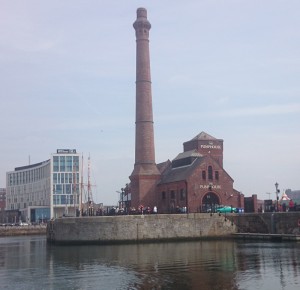 Because it was school holidays and Grand National, there were heaps of people around the docks every day. Except for Saturday at 12:00 hrs. That’s when we had our morris dance performance. 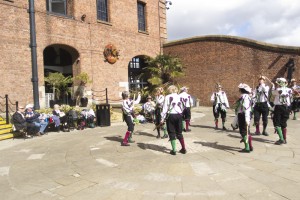 No audience is not a problem for us, we had our fun. And after the show we nearly sunk WRT while making a group picture. 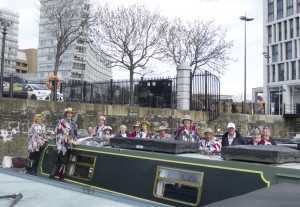 Sunday was the only bad day, weather wise. It was absolutely windy. And sitting in the conservatory (designated smoking area) everything was moving: the pontoon and the boat. It almost made me seasick. The narrowboats that came in on this day had a tough journey, trough all the vast, and therefore windy docks. All the other days were fine. I even got my half jeans out! 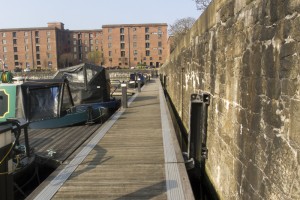 A couple of docks to the south houses Liverpool Marina. We visited the chandlery there, to get a Scottish tiller flag for Lawrance. They didn’t have a flag, but they did speak Dutch! One of the owners is Dutch, she was born in Arnhem (of all places!). One of the employees is Dutch as well. So I could practice my Dutch a bit, before I go to Holland in June.
In the marina we also saw our former neighbours from Scarisbrick Marina: Cat and Nigel, on the Dutch barge New Dawn. They spent the winter in Liverpool Marina.

I did mention the boutiques in Albert Dock. They sell the usual crap (like cheap Everton mugs), but one shop had the barometer and clock I wanted to have for a long time. They also cover the discolouring on the wall, where Andy and Christine had theirs. 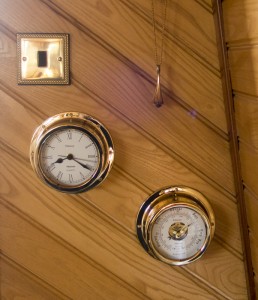 Clock and barometer don’t need polishing, but some brass objects on WRT looked shabby, next to this shiny new inventory. So I had to clean the indoor part of three mushroom vents, and the ship’s bell. Especially because on our way home we plan to visit the first owners of our WRT, the afore mentioned Andy and Christine.

And what about the lost chimney, you will ask? Let’s start with mentioning that half the boats, moored in Salthouse Dock, came from Scarisbrick Marina: Jonathan Puddle, Majestic, M and M, Jaybird, Tin Lizzy, Muckle, Thor, Thea, Harlequin.
Bill, from Tin Lizzy, was on the pontoon next to ours. He was doing some external spring cleaning, and took the chimney off. How he did it is still a mystery, but he managed to drop the 6.5″ wide chimney through a 4″ wide gap between pontoon and his boat, into the water. Out came his magnet, which did have a long enough rope to reach the bottom of the dock, but the chimney was gone. We now assume that Liverpool Nessy (CRT had warned us for him) is swimming with a narrowboat chimney on his head. 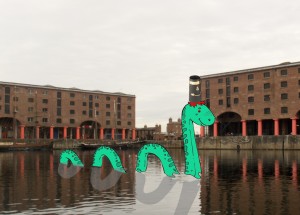 On the Thursday morning (after cleaning our propellor from a panty hose and a bra) Jaybird, Tin Lizzy, Muckle, two unknown boats and us left Salthouse Dock. It’s Lawrance’s day on the tiller, so I can take pictures. I absolutely love this Tobacco Warehouse. It’s the world largest brick warehouse, 14 stories, 150,000 m², and its construction used 27 million bricks, 30,000 panes of glass and 8,000 tons of steel. 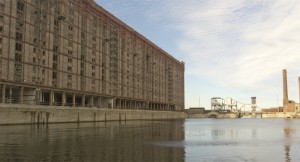 We moored at Bridge 10, and all the Scarisbrickers went to the Bootle Arms for supper. We had a good meal and a good time, and a certain chimney played a significant role in the conversation…

All in all it was a great trip to Salthouse Dock. One we definitely will do again.