That’s on the ‘clock’ just when I turn WRT out of the last of the Stourport Locks onto the river Severn. As we bought her with 3150 hours, we’ve done 850 hours of cruising so far. Most of them were easy. The last half an hour certainly wasn’t. It’s windy and on the landing pontoon for the first lock is a boat, getting some urgent repairs done. Lawrance manages to get off, but I can but drift onto that other boat. The staircase lock itself is not the problem, but, although Lawrance had a look out for oncoming traffic, and concluded that there was none, there is a boat coming up in the other staircase lock. It’s awkward enough to get from the first staircase into the second, with a boat like WRT, but with oncoming traffic it’s horrible. Especially with the already mentioned strong wind. But I manage, and off we are, on the river Severn. Downstreams, towards Worcester. 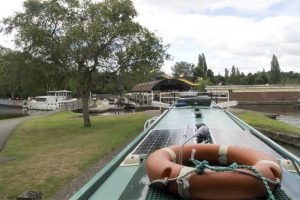 The first lock, basically just around the corner, is a new experience for us. No bollards, to wrap you rope around, but a iron wire hawser. You put your rope around it, and hold both ends. 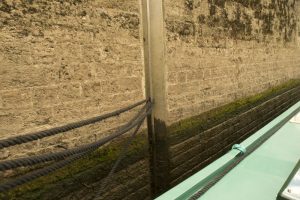 The lock keeper explains it very clearly. It’s easy enough (if boat length and hawsers kind of match…). What comes as a surprise for both Lawrance and me: we’re going DOWN. Of course, we’re going downstream, so of course we’re going down in the locks. It’s just that the lock walls are so high above us, if it was a canal, we would go up.

The second lock is a bit of a nightmare. The hawsers certainly don’t match WRT’s length, and to make matters worse, while I’m still trying to get anywhere near a wire, the lock keeper starts the procedure and we’re going down.

At the third lock I do a typical Dutch thing: I ignore the red traffic light. Basically because the lock keepster is waving me in… She tells me what to do in this lock, where the wire hawsers are at the same distance as in the second lock: just walk on the gunwales and use the one in front of you. 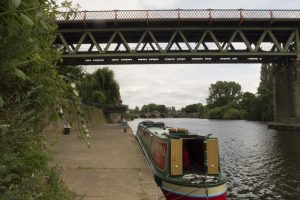 Other than that, it’s an easy run to Worcester, doing 3 mph on tick-over. What puzzles me, though, is if I look to my left, we’re travelling at a fair speed. If I look to the right, it looks like we’re standing still… 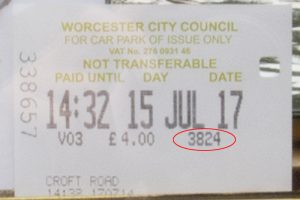 We moor in Worcester at the pay-and-display, next to the race course.
Two days we stay. We visit the cathedral, (and hear a rehearsal of one of the choirs of the festival, next week)… 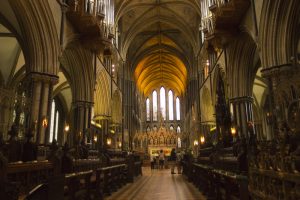 …the Commandery (a museum)… 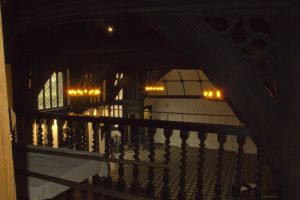 and (most important) get the problem with my camera fixed (one new battery and a battery charger). 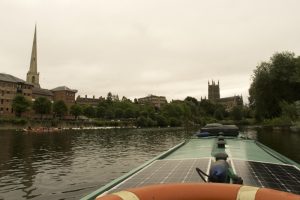 We leave Worcester amidst Dragon Boats and lots of swans. And encounter the first of the somewhat bigger traffic on the Severn: a passenger ferry. 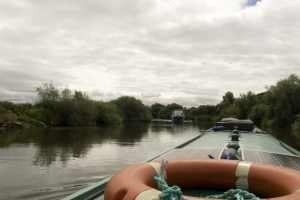 Upton-on-Severn is our next stop. A little village, very relevant to my morris dance career. 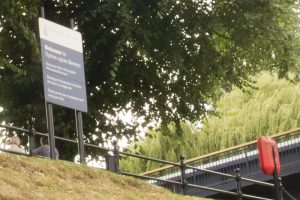 Upton-on-Severn has two morris dances: the Upton-on-Severn Hanky Dance and the Upton-on-Severn Stick Dance. I danced and played both of them umpteen times. So before we leave I just have to get my melodeon out and play both tunes… Before that, I manage to take a picture of what I might encounter later on. But luckily for me, by the time we set off, the barges have their lunch break. 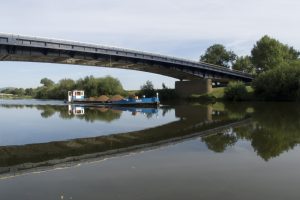 Barges on the Severn

After a long cruising day of two hours, we moor on a different river, the Avon. 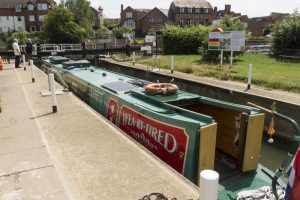 Bye, bye Severn. I’m not too sure whether I like you or not. You’re a bit boring. You’re just a vast amount of water, lined with trees. There is nothing to see…