The shape of things to come

The plan was to do my bookkeeping for January and then do my Income Tax for 2013. But the Tax Department hasn’t released the software yet, so after bookkeeping it’s de-junk-time again.

Only one family came to my ‘book shop’ yesterday. So I’m left with most of my books. Time to start throwing some away. My grammar school books, and the books from my accountancy study, for example. They are really old, so they end up in the paper bin. I will keep the books about computer programs for a while. I divide them over two shelves, otherwise it really looks too empty. And my paper bin is now full.

But empty it gets…! As you can see on the pictures. 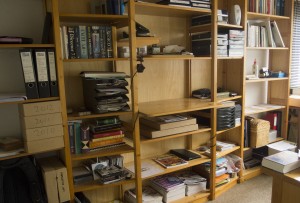 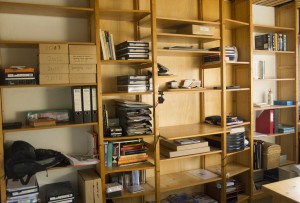 …and at the moment

OK, there is still a lot on the shelves, but the good thing is, I know exactly what to do with it. Some time ago I started to write down all my belongings. And colour coded them for what I want/need to do with the stuff. 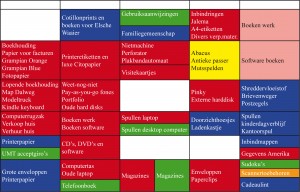 In the beginning the most used colour was for: Don’t Know Yet. But at the moment that colour is no longer there. I now know exactly what to do with what. Blue means: I know someone to give it to. Yellow is for an auction in June, pink for the paper bin. White is an empty shelf, green is for throwing away, just before I move to the UK. And yes, red is for keeping. It probably means that I have to go through the entire process once more. Only the carton boxes on the left in the ‘at the moment’ picture, seven of them I have to keep. That’s seven years of administration for the Tax Department.

Although it doesn’t change the colour of one of the shelves in my table, I can make things smaller, so to speak. I know, Lawrance classed it as hoarding, but remember I kept the slim CD boxes? (Monday 29 July 2013) I now transfer all my CD’s into these slim boxes. And it does make a huge difference. 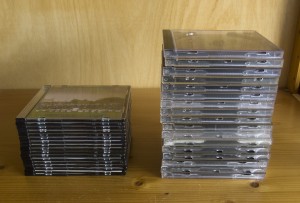 Half the amount of space necessary

Then I wonder if I still have a couple of CD’s in the living room. Which would not be a problem, because I’ve still ten slim boxes left. So while getting a cup of tea I have a look in the drawer. And guess? Twenty-eight more CD’s!!! Well, that will be a case of: most of them go in a paper CD cover, or to go into the bin.

It would be ideal if on the 16th of February I would know exactly how much storage space I need. Because then we are going to view a boat…! I found one on the internet that matches so far nineteen of our twenty nine points on the wishing list. There are only two minus points: it’s a 60 footer, and it is older than we wanted. But the lay-out is nearly perfect.